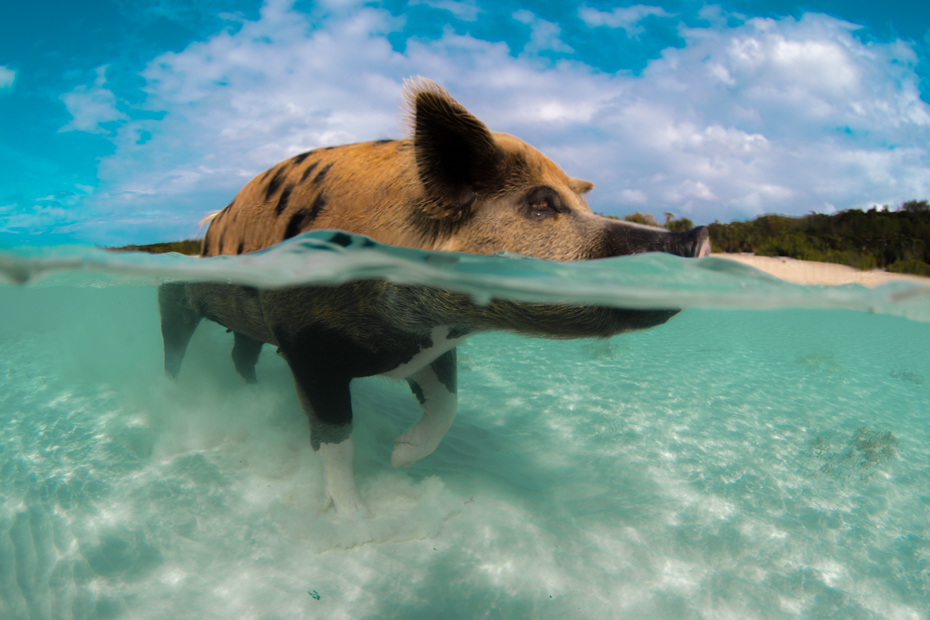 Big Major Cay Bahamas is one of the most famous spots in the country, and once you visit, you’ll quickly realize why. Pig Beach, as it’s nicknamed, is home to the world-famous Bahamas pigs. Visiting the island allows you to see them up close, walk along the island’s beaches, and even swim in the water beside them.

However, while most people are familiar with the swimming pigs on Pig Island, few people know how they get there or what exactly to expect once they arrive. In this article, we’re going to help you understand all of that, as well as highlight why a Swimming Pigs Exuma day trip is the best way to see the famous site.

Keep reading to learn all about Big Major Cay! 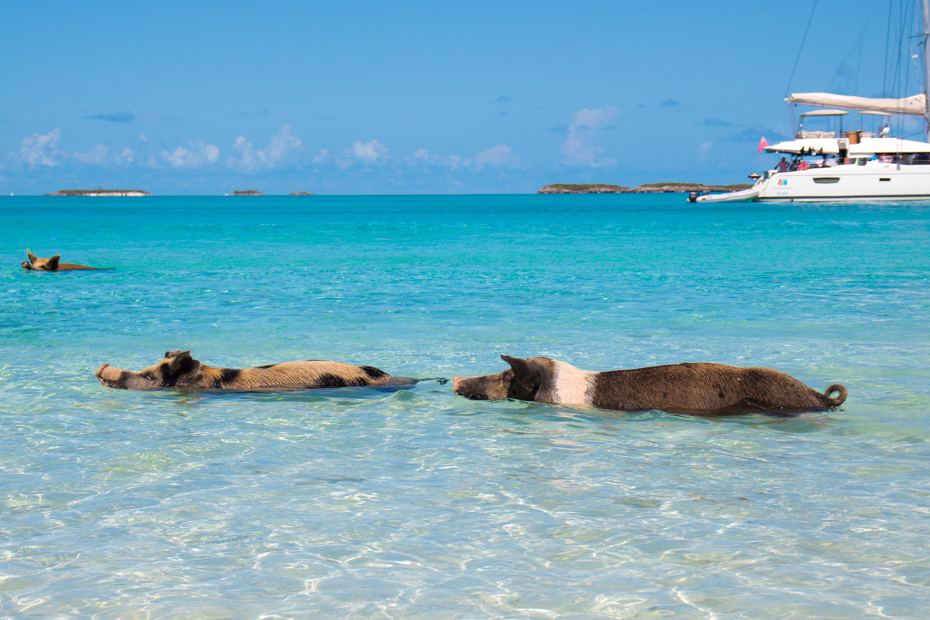 Swimming pigs Exuma tours let you get up close and personal with the friendly creatures.

How Did the Pigs Get to the Island?

If you’re not too familiar with the pigs, one of the most remarkable facts about them is that they live on an uninhabited tropical island all by themselves. There aren’t any humans that live on the island with the pigs, just a couple of goats and cats. So how did they get there? 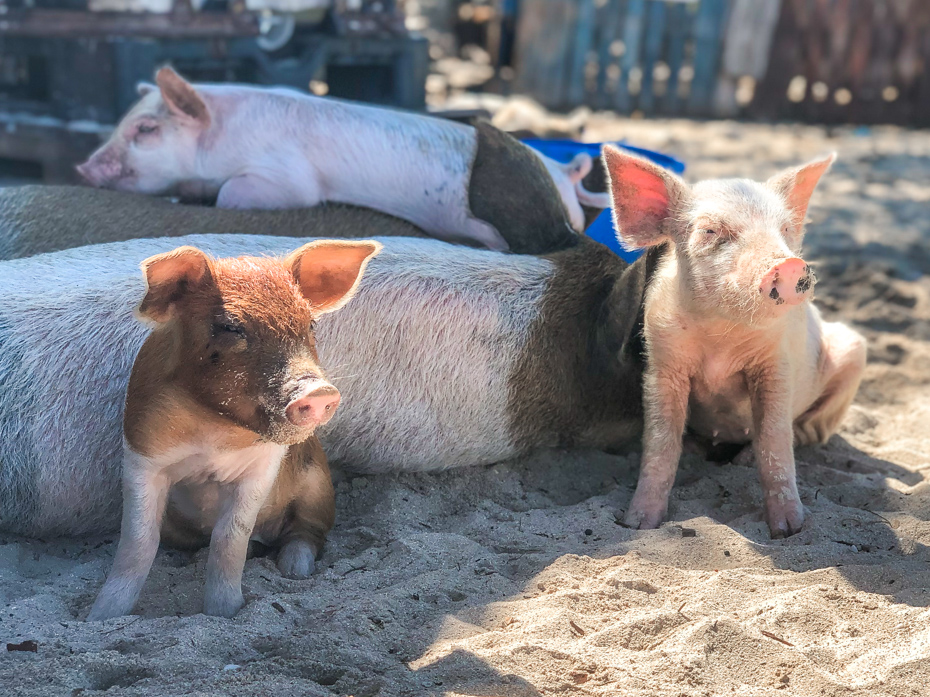 You’ll see pigs of all shapes and sizes on Pig Beach.

Depending on who you talk to, you’ll receive a different answer. Some locals claim that the pigs were traveling on a boat that shipwrecked in the area and have resided on the island ever since. Others believe that sailors from a nearby island wanted to cook them, and so they brought them to the island with the intention of returning but never did.

A final (perhaps most likely) version of the story claims that farmers from a nearby island grew tired of the smells the pigs were leaving in their wake, and so they decided to bring them to Big Major Cay, as it was uninhabited. As the farmers brought the pigs food by boat, the pigs became friendlier and friendlier, eventually becoming the gregarious animals that they are today.

Regardless of which tale you end up buying into, a Pig Beach Bahamas tour will open your eyes up to how amazing they are!

Where Is Big Major Cay Bahamas?

Many travelers who visit the Bahamas pass through (or stay at) the country’s capital, Nassau. Given the popularity of the pigs, many often wonder how they can get to Pig Island to see them. 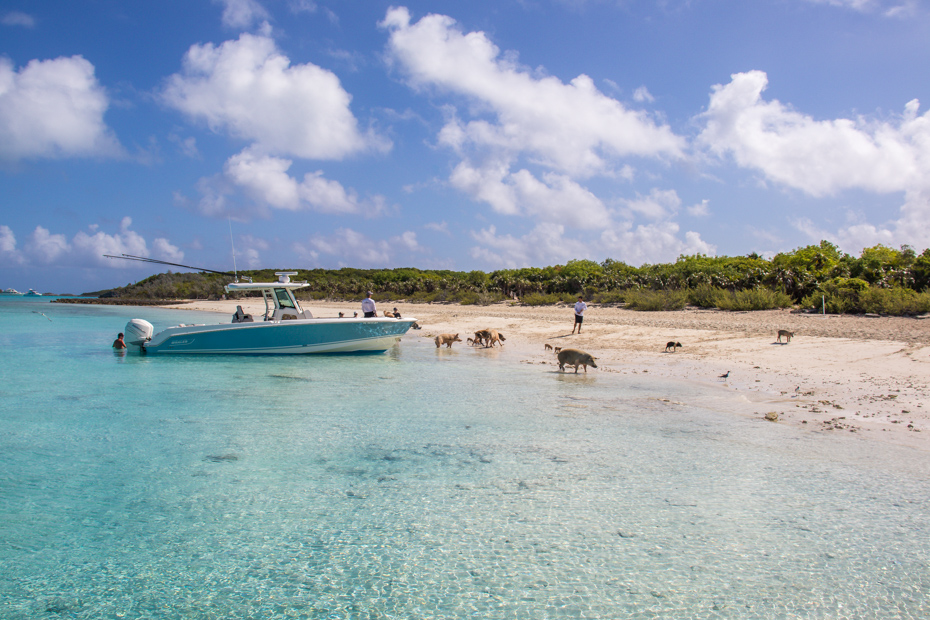 Pig Island is a paradise you won’t want to leave.

At first glance, reaching Pig Beach can seem like a bit of a hurdle. The island is located a little more than 80 miles to the south of Nassau. Given its small size (and the small sizes of the surrounding islands), Big Major Cay can’t accommodate large international flights or cruise ships.

However, reaching Pig Beach is something that every traveler to the capital should do. The island is a part of the Exumas, a chain of 365 islands that offer gorgeous beaches, bright-blue water, and fewer crowds than places like Nassau or Freeport.

Many of the travelers who choose to embark on a Pig Beach Bahamas tour do so by first traveling to the nearby island of Staniel Cay. From there, they can then reach other islands in the area, including Big Major Cay Bahamas.

How Can You Get to the Bahamas Pigs?

Travel companies know that people are interested in seeing the Bahamas pigs, and because of that, have begun to make “knock-off” pig islands. While they might feature pigs in a tropical environment, these sorts of places are only imitations of the Exuma pigs at Big Major Cay Bahamas.

As mentioned, the original pigs are in the Exumas, and while it might seem difficult to reach, it’s easier than many people realize.

If you decide to travel to the Exumas, you have two ways to get there: by boat or by plane. While taking a ferry may sound romantic, it ends up taking several hours out of your day. The boat also passes over rough, open waters, causing many passengers to get seasick.

In contrast, the plane ride from Nassau to the Exumas takes around a half-hour. You won’t have to worry about seasickness, sharing the vessel with hundreds of other people, or any of the other downsides that go along with taking the boat. Because of all of that, traveling by plane is the best way to go about Nassau Bahamas excursions. 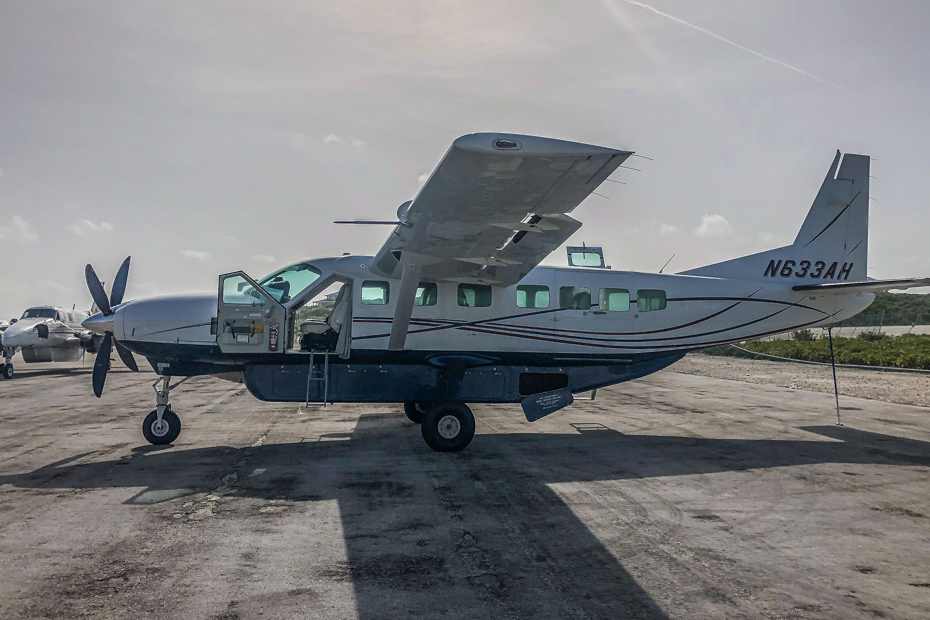 What Can You Expect Once You Arrive?

As mentioned, Big Major Cay Bahamas doesn’t have an airport. You’ll need to first touch down on the nearby island of Staniel Cay before switching to a boat and making your way over to the island.

As your boat approaches the island, you’ll see the pigs already in the water, splashing and snorting as they paddle their way out to greet you, expecting food. It’s a welcome that’s entertaining to witness, to say the least!

The Bahamas pigs have a shelter that they can sleep under on their island.

Once you arrive at the island, you’ll have plenty of time to explore Pig Island. You can walk alongside them on the beach, hang out with them in the warm azure water, and even try your luck at identifying who all of the pigs are.

There are some rules you’ll have to follow, such as not feeding the pigs directly by hand, not feeding them on the beach, and only feeding the pigs appropriate foods. These rules exist to promote both the safety of visitors and Pig Island’s inhabitants. But as long as you follow them, you’re free to interact with them and poke around their island home!

Other Things to do in Exuma close to Pig Beach

Many travelers who sign up for a Swimming Pigs Exuma tour end up designating Pig Beach as the highlight of their trips. However, there are many other sites that you get to see on day trips from Nassau.

If you’re looking to see more wildlife, you can rest assured that you won’t be disappointed. Besides the Bahamas pigs, travelers also get to see nurse sharks at Compass Cay, as well as endangered iguanas at Bitter Guana Cay. Most people have never seen either of these species up close before, making both experiences popular parts of the tour as well.

You’ll also get the chance to see some other highlights in Exuma. Thunderball Grotto, an underwater cave system that was one of the filming locations for the James Bond film, Thunderball, is another place you’ll stop at. You’ll get to snorkel around the caves, observing the menagerie of aquatic wildlife around you.

Besides underwater caves, Staniel Cay day trips also give you the chance to walk around sandbars at Pipe Creek, snorkel around an underwater plane, and spend some time exploring the village of Staniel Cay. 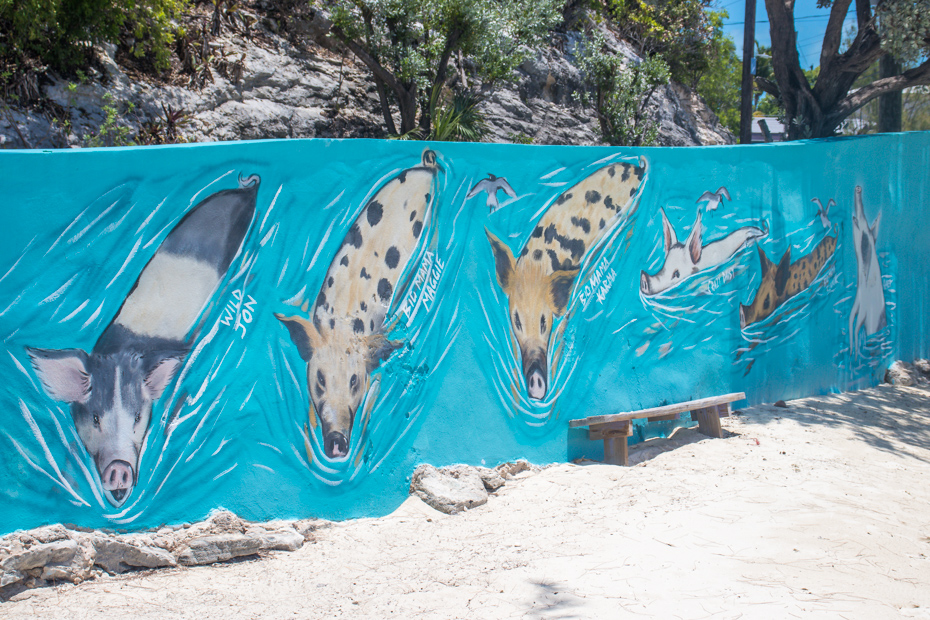 The nearby island of Staniel Cay is close to Pig Island.

It’s hard to say which site you’ll fall in love with the most!

While there are many great trips you can sign up for from Nassau, one of the top excursions takes you to Big Major Cay Bahamas. Once you’re there, you’ll get to see the Swimming Pigs Exuma, as well as all the other fantastic sites in the area.

Reaching the Exumas might seem tricky, but air travel makes it easy. Besides offering a more comfortable experience, flying by plane also gives you more time to enjoy the sites in the region.

Sign up for a Staniel Cay day tour today to take your Bahamas vacation to the next level! 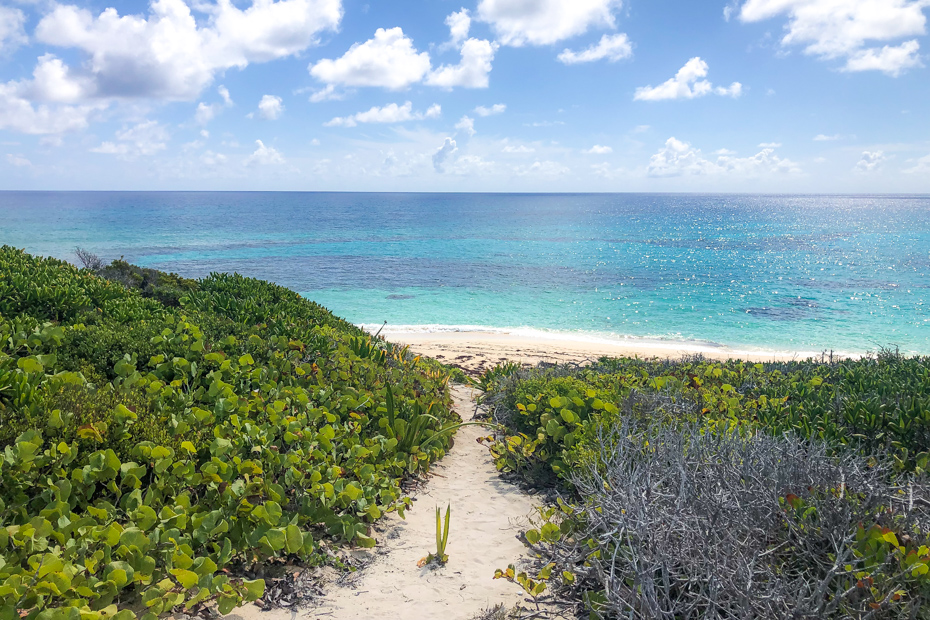 How to Get to Staniel Cay From Nassau or Florida 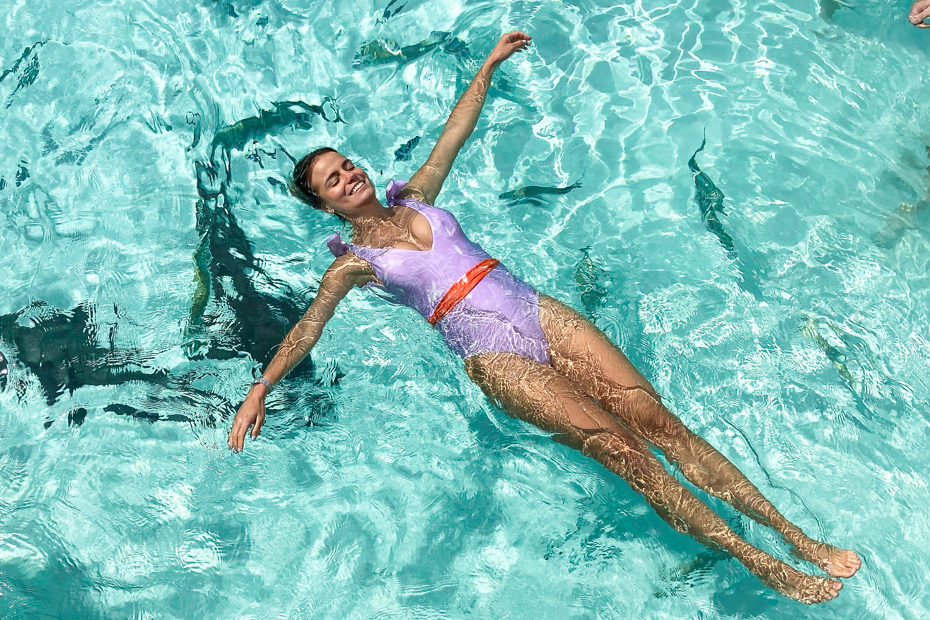 Compass Cay Exuma is home of the Bahamas Sharks Experience 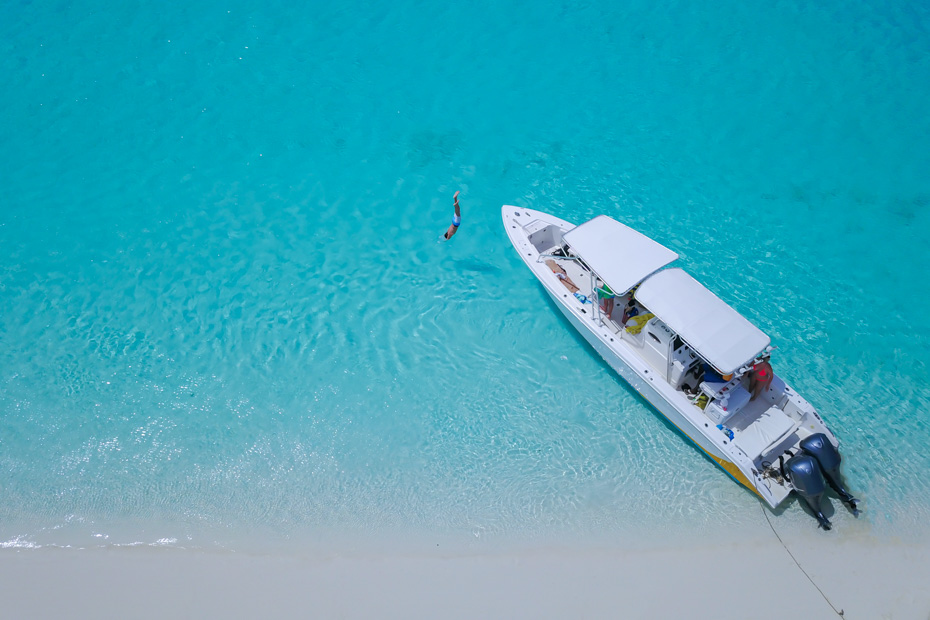