Bitter Guana Cay: The stunning tropical oasis, home to an endangered species of Bahamian Rock Iguanas in the Exumas. Discover this unique wildlife on our Bahamas Day Trips by Plane to Staniel Cay.

The Exumas are made up of 365 islands, islets, and cays to the south of the Florida peninsula and is known to be the most beautiful region of the country. 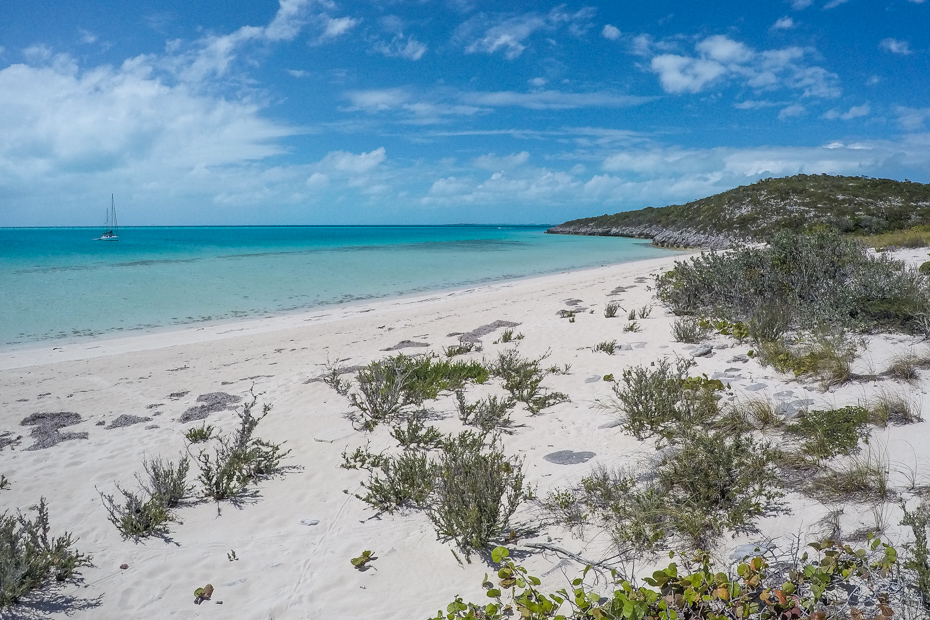 The pristine beach on Bitter Guana Cay, home to the Bahamian Rock Iguanas

Iguana Island Bahamas (Bitter Guana Cay) sits just 86 miles south of the country’s capital city of Nassau, making it an attractive day trip for many Bahamas tourists. It can also be accessed on a day trip from Miami. 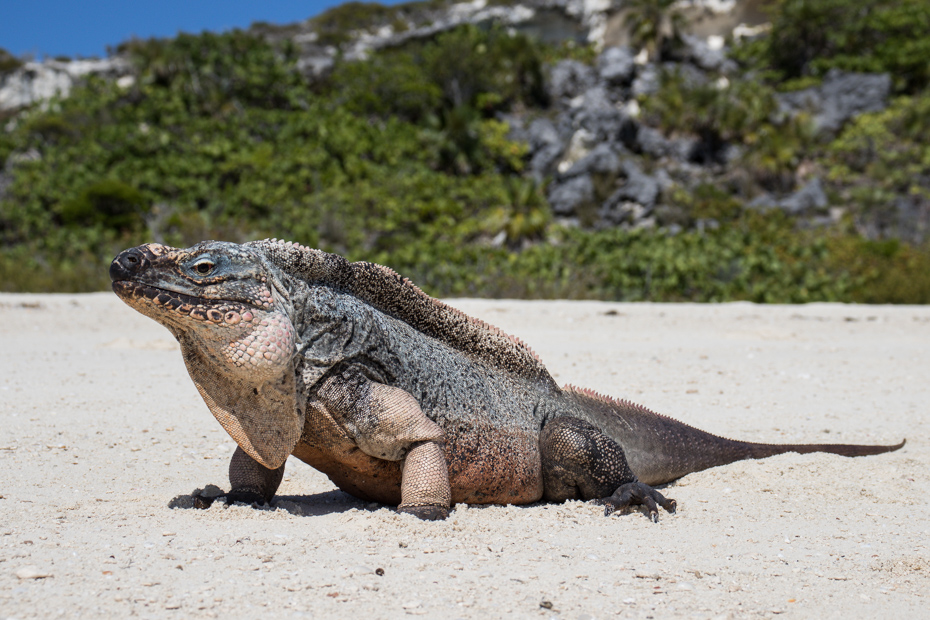 A Bahamian Rock Iguana on the beach at Bitter Guana Cay

It is estimated their species has evolved for the past three million years, branching into three sub-species: the Andros Island iguana, the Allen’s Cay iguana, and the Exuma Island iguana.

The iguanas on Iguana Island Bahamas are mostly about two feet in length, however, they can grow up to four feet from head to tail. They are brown with a distinctive pink color. 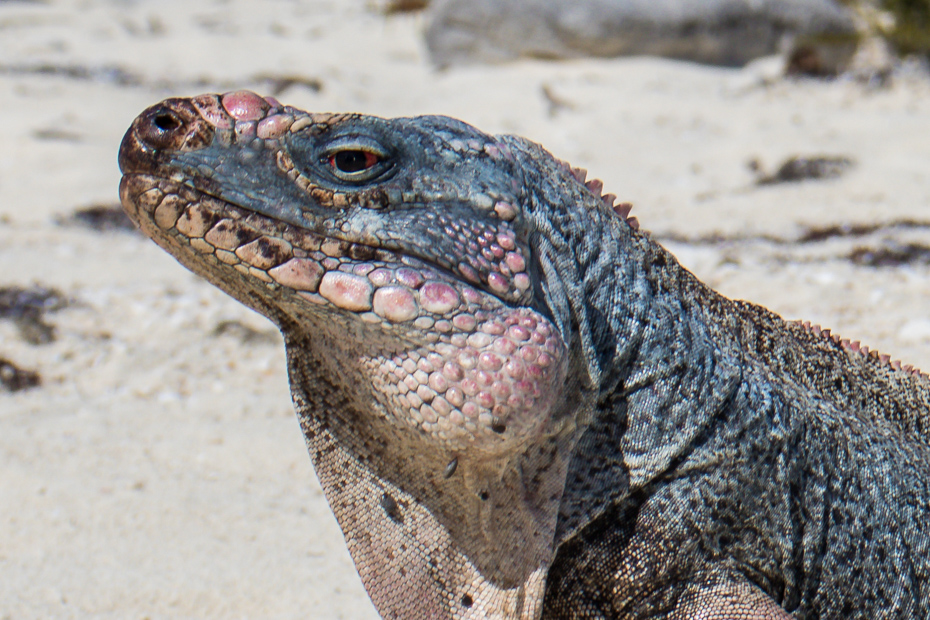 Bahamian Rock Iguanas are famous for the Pink Color

The population of Northern Bahamian Rock Iguanas is, for the most part, herbivorous — making its diet a plant-based itinerary. However, that is not to say it is not supplemented with the occasional dead crab or bird. They do not require any liquids in their diet especially if the plants they feed on are succulent.

Northern Rock Iguanas can live up to forty years.

Sexual maturity in the male iguanas happens between six to nine years old. During spring breeding, males tend to get lighter in color. 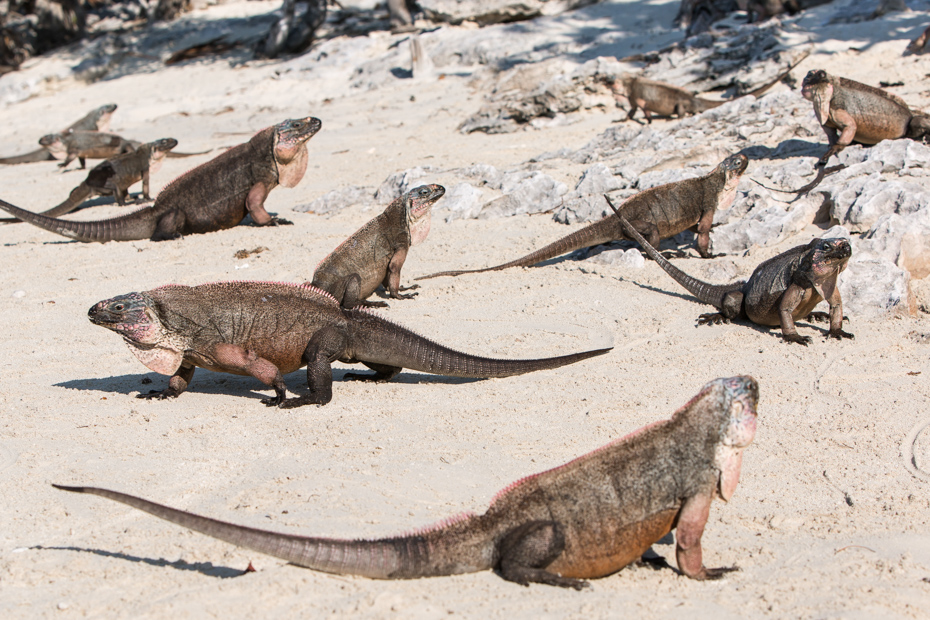 Around early summer (early to mid-June) female iguanas will lay up to a dozen eggs which feel like leather in texture. The eggs are buried in shallow burrows in the sand and left there for three months until they hatch and claw their way to the surface. 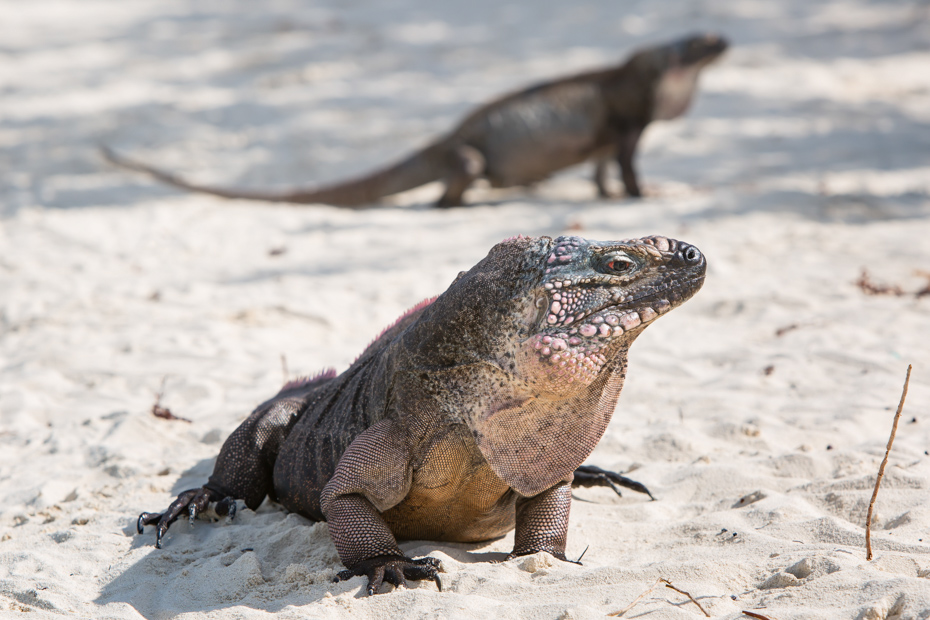 The Exuma Rock Iguana are an endangered Species of the Bahamian Rock Iguanas.

Because of their isolation on the island, they are indigenous and not found anywhere else in the world. Because of this, scientists have traveled the world over to study the Bahamian Rock Iguanas and their prehistoric features which resemble their dinosaur ancestors.

What to do at Iguana Island Bahamas

Though the island is small and at points narrow, the rocks which the iguanas call home make for great hiking opportunities. 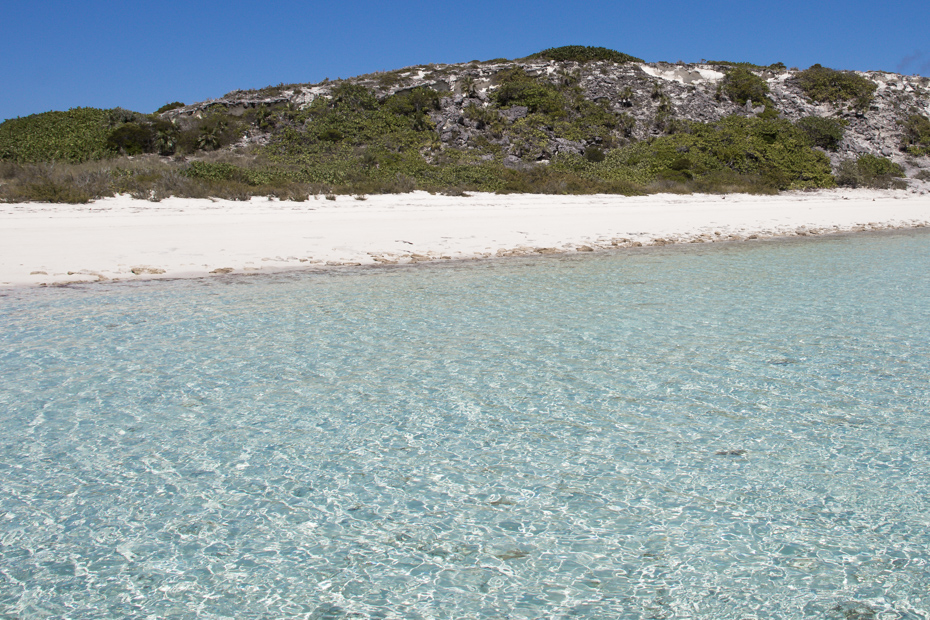 Bitter Guana Cay is a small island in the Exumas

There are numerous beaches on the island and snorkeling is a very popular activity among tourists. The shallow pools filled with beautiful coral and marine life are particularly interesting. On the east shore, one can witness crashing waves. With a good eye, you may be able to see Nicholas Cage’s private island.

What to remember on Iguana Island Bahamas

The iguanas on Iguana Island Bahamas are fairly domesticated just as wildlife on any of the Exuma Cays. They are used to human interaction and, generally, pretty friendly. However, they will only let you get so close. 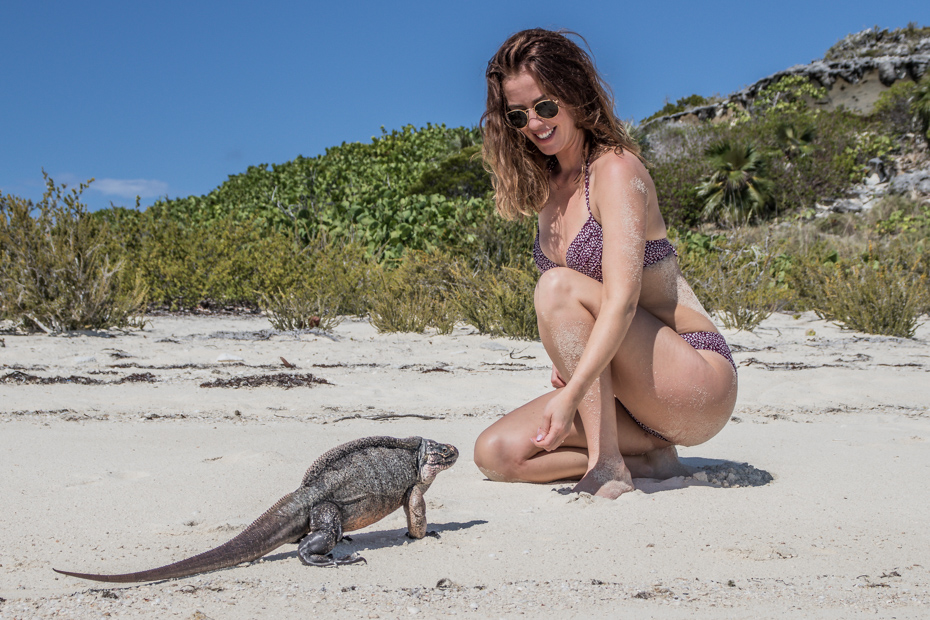 Respect their boundary on their protected island and don’t make them feel threatened.

This species is a dying breed and they are in danger of becoming extinct. It is estimated there are only 5,000 left of its kind and the population has decreased over 50% over the course of the past 60 years.

The biggest threat posed on Bahamian Rock Iguanas is hunting as the Caribbean iguana is still regularly sought-after for human consumption. As an endangered and protected species, hunting still takes place illegally. 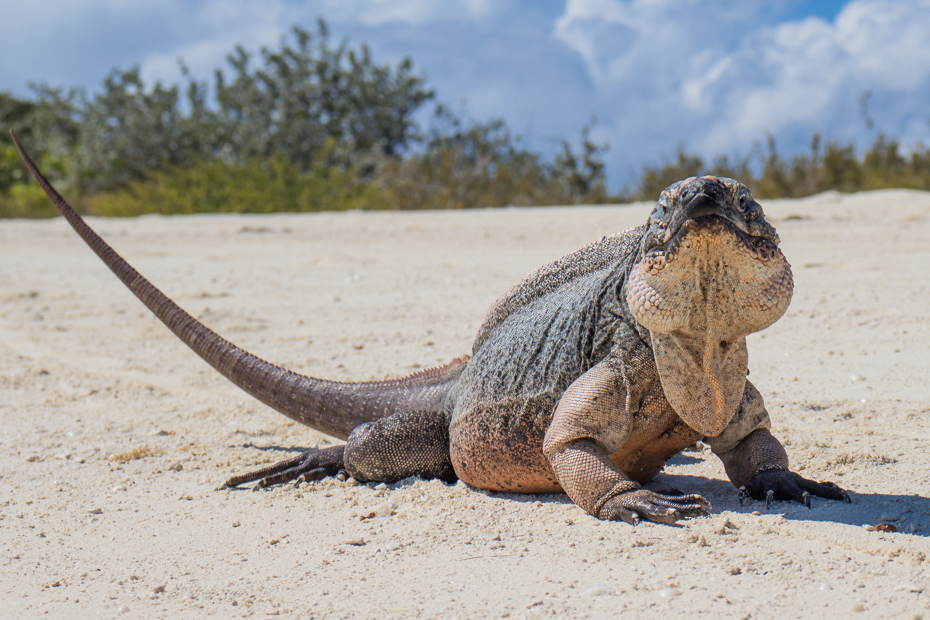 Though, humans are not the only threat to this species. Non-domesticated dogs, wild pigs, and goats have all known to either prey on young iguanas or dig up the nesting eggs.

Not only that, but the Northern Rock Iguana’s habitat is in major decline due to tourism development and increased logging.

Staniel Cay: one of the Exumas most popular islands with an airport landing strip and several shops and restaurants. About three miles north of Iguana Island Bahamas. 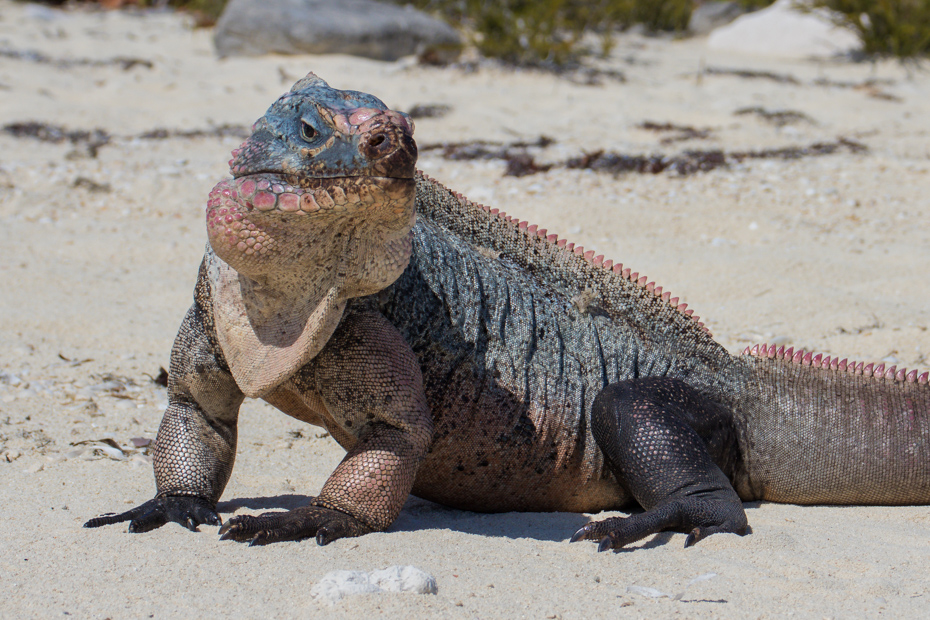 Visit the Bahamas Iguanas on a Day Tour

How to get to Bitter Guana Cay (Iguana Island)

Visit Iguana Island in the Bahamas from Nassau or Miami / Fort Lauderdale, Florida with Bahamas Air Tours. Our nine-seater aircraft features the best opportunity to witness the majesty of the Exuma Bahamas from above.

With a customizable itinerary and private viewing window on-board, you are guaranteed to see everything you want on your Bahamas vacation.