Visit the famous Bahamas Swimming Pigs at Pig Beach on our Bahamas Day Trips to Staniel Cay in the Exumas. The top bucket list activity and most sought after destination in the Bahamas!

Pig Beach (also officially known as Big Major Cay), is one of 360 islands found in the Bahamas’ Exuma Cays. It lies inline with hundreds of cays and islands that stretch north from Exuma Island.

The island itself is no longer than one mile in length and can be traversed on foot in a matter of an hour or two. Although the island is not big in size, it receives more annual visitors than a majority of the Bahamas islands which were visited by 6.62 million tourists in 2018. 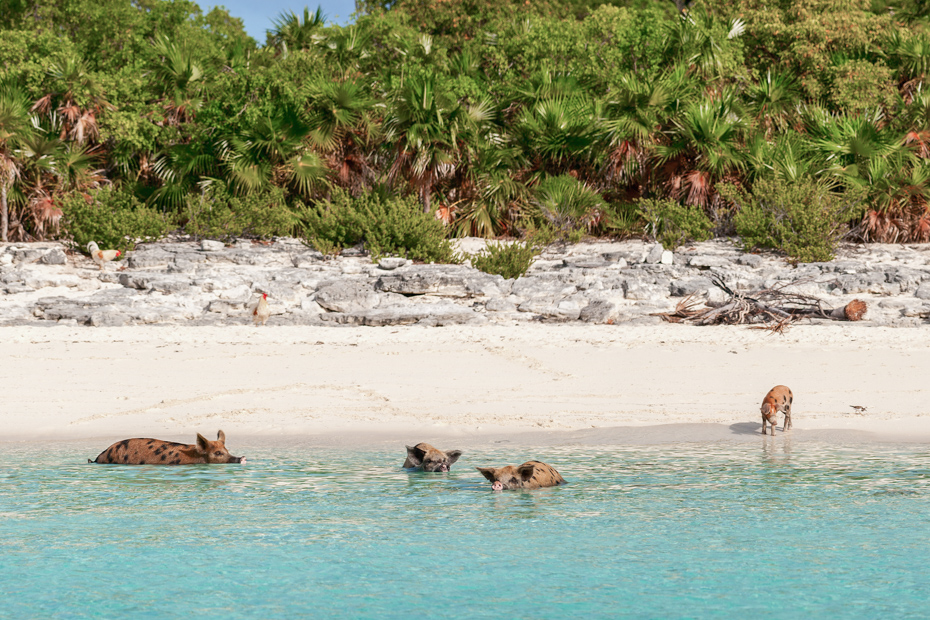 Pig Beach and the Swimming Pigs of Exuma

The Swimming Pigs that Live on Pig Beach

The island is world renown for its Pig Beach, getting its name from the Exuma pigs which, along with a few stray cats and goats, are the island’s only inhabitants. There are an estimated 20 to 25 pigs and piglets on the swimming pigs beach.

The pigs range in size from baby piglets which are a crowd favorite to Big Momma which is the largest and oldest pig on the island. 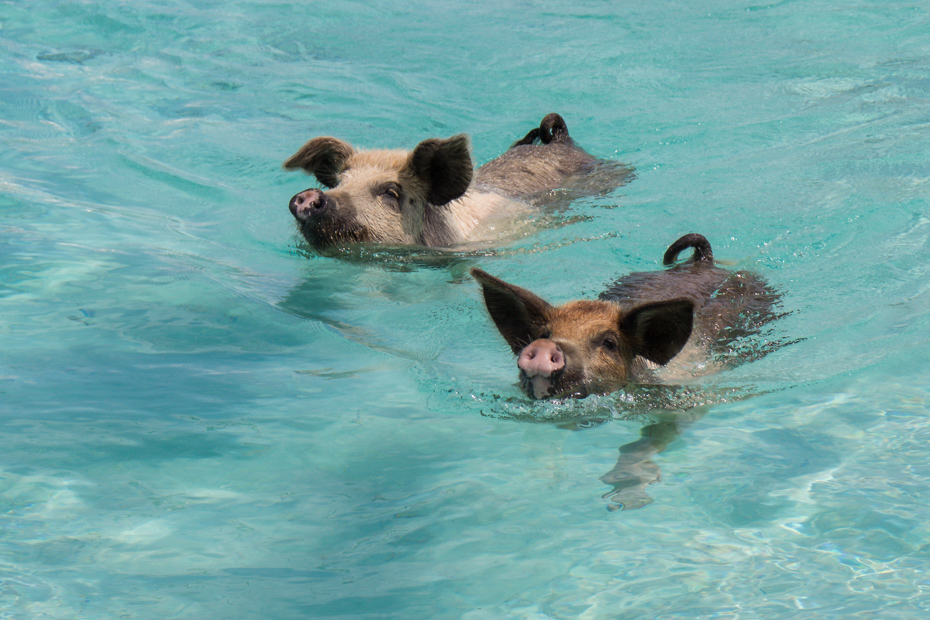 Two cute pigs in the water at Swimming Pigs Beach

The popular Big Major Cay lies just near Staniel Cay, a larger cay and more accessible destination to which visitors can fly into using the Staniel Cay airstrip. A swimming pigs tour is one of the top attractions when visiting Staniel Cay as a boat ride to Pig Beach takes no more than fifteen minutes.

Big Major Cay’s proximity to Staniel Cay makes it a popular destination for private yachts and those who are docked at the Staniel Cay Yacht Club. 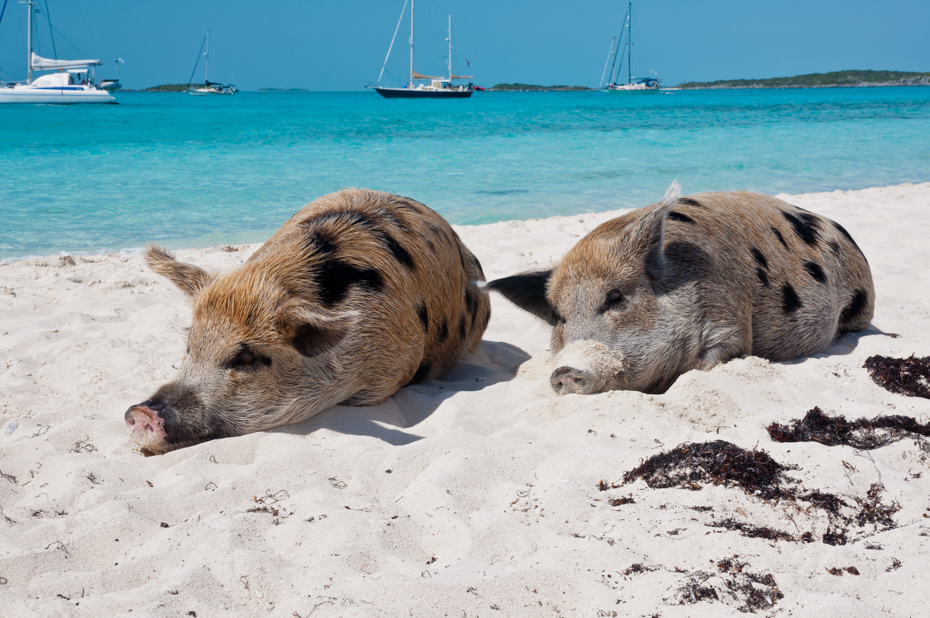 How to Get to Pig Beach

Big Major Cay lies just shy of 100 miles south of Nassau (the Bahamas capital city and hub for all tourism). One can travel to Pig Beach by power boat, ferry, or private plane. Bahamas Air Tours will bring you to Pig Island from larger destinations such as Nassau, Fort Lauderdale, and Miami. 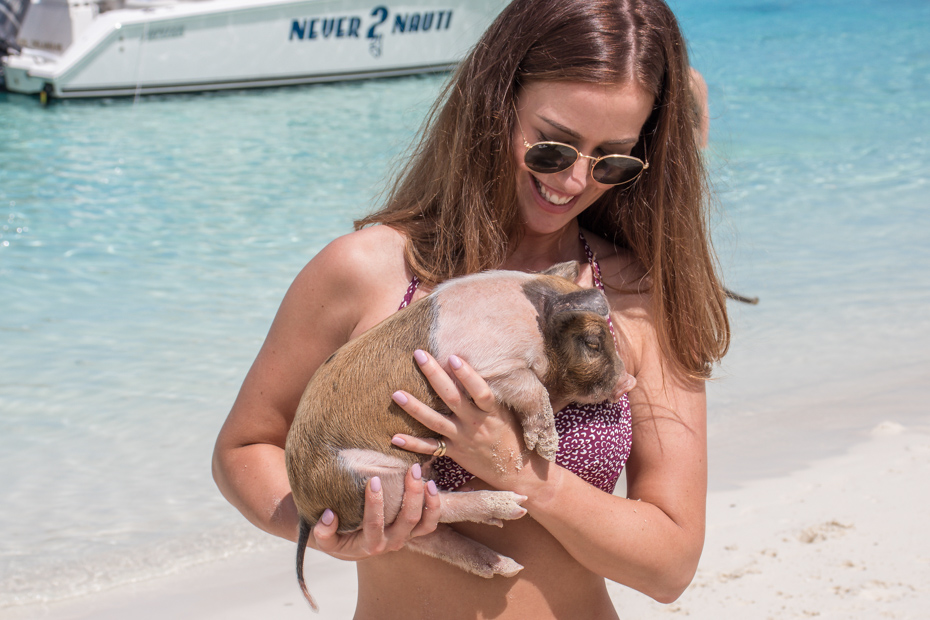 Visit the Swimming Pigs on a Pig Beach Tour

The plane ride is only thirty-minutes from Nassau, making it a prime day trip location. The ferry, alternatively, takes around six hours round trip depending on sea conditions and should be avoided if visiting just for the day.

Bahamas Air Tours offers Day Trips to the Bahamas Swimming Pigs at Pig beach by Plane from both Miami and Nassau.

History of this Swimming Pigs Island

Although many folktales revolve around how the pigs got to Pig Beach, the most commonly accepted explanation is they arrived from nearby Staniel Cay and were placed there by locals intentionally. This explanation dates back to around the early 1990’s.

Staniel Cay started as a farming community. However, the pigs gave off unappealing smells which the locals didn’t like and received complaints from annoyed neighbors. 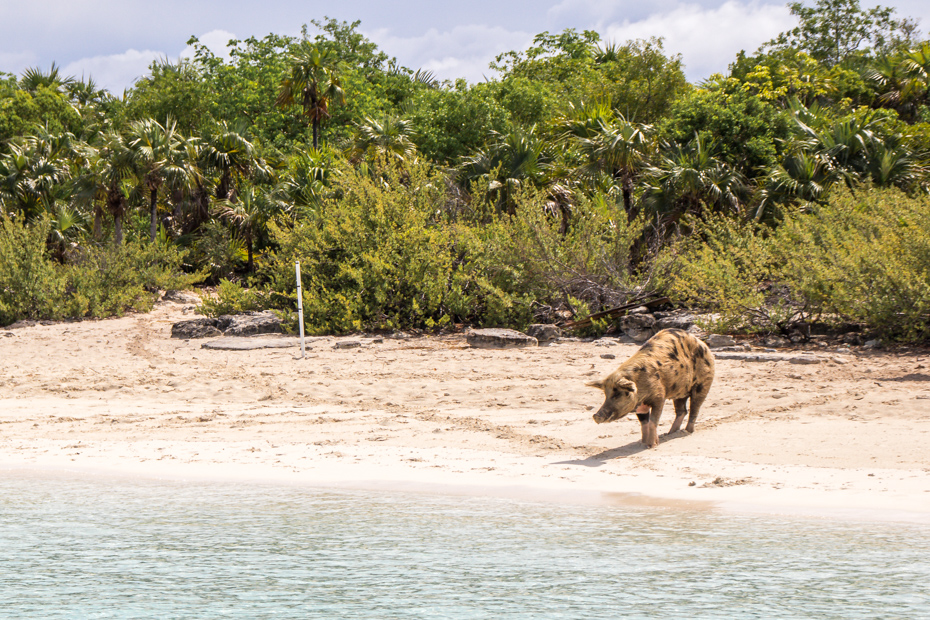 To combat this, farmers moved the pigs of the community to Pig Beach on Big Major Cay where the wind carried their smells away from Staniel Cay and the village.

To feed the pigs, villagers would have to travel from Staniel Cay to Big Major Cay (about a ten minute boat ride) with food for the Exuma pigs. As time evolved, the Bahamas swimming pigs started equating the villagers boat to their daily feed. 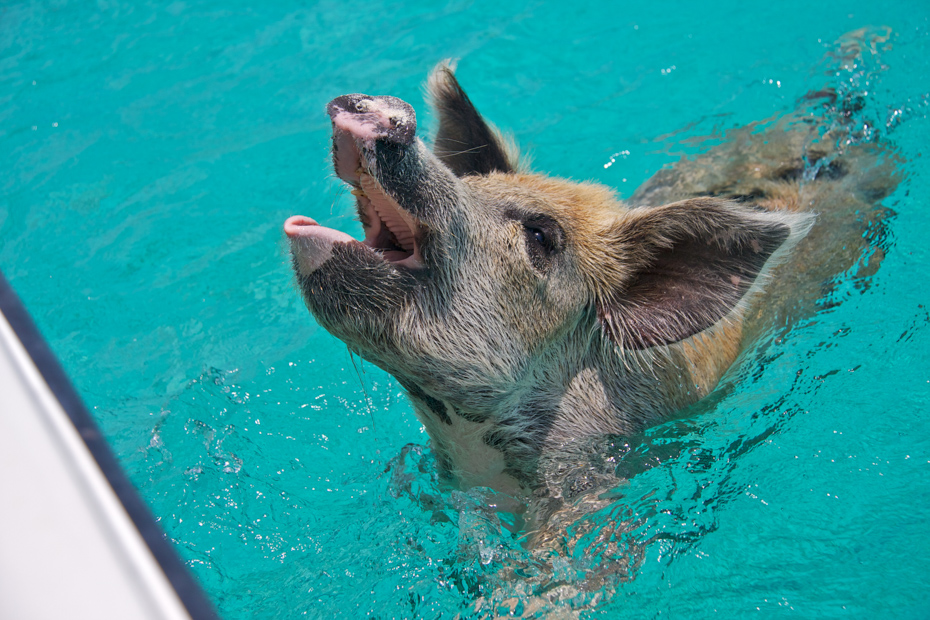 The Bahamas Swimming Pigs swim out to greet a tourist boat

Soon enough, farmers started encountering the Exuma pigs as they neared the island, already swimming to the boat in order to get the first feed. You will have a similar experience on your Pig Beach tour. Thus, the Bahamas swimming pigs attraction was born at the aptly named Pig Beach.

Since no one knows the precise truth, there are alternative explanations for how the Exuma pigs ended up on Pig Beach. Some believe the pigs swam to the island after a boat which they were aboard went shipwreck during a storm in the Bahamas Sea.

Another story explains how sailors brought them to the island with the intention of eating them but an unplanned emergency forced them off the island and they left the pigs to fend for themselves, never returning for their livestock. While these are colorful stories which get passed around on Bahamas Pig Beach tours and are usually popular with tourists, they are almost certainly fabricated. 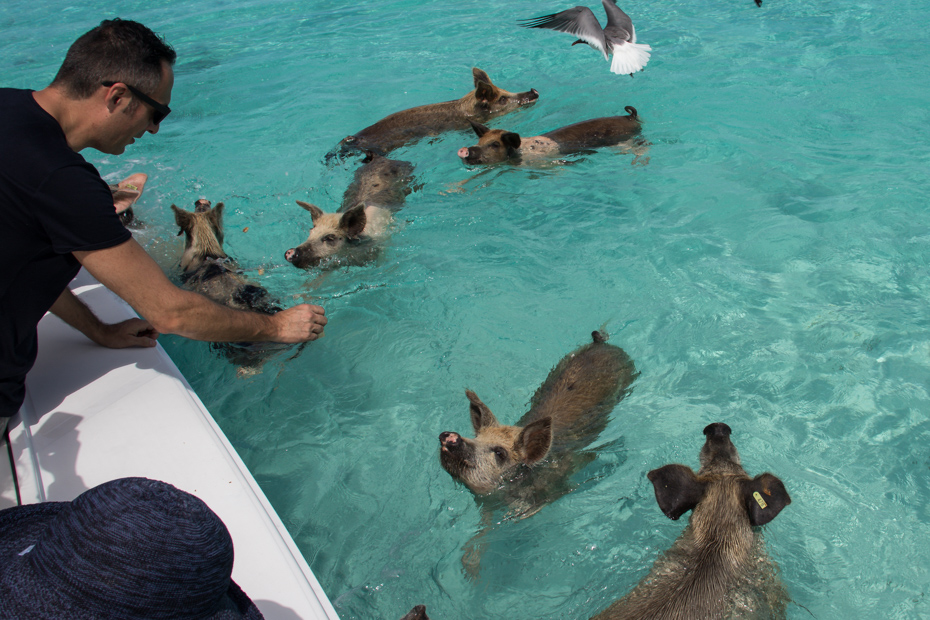 Feeding the Pigs on a Swimming Pigs Tour

The island and surrounding area is of similar appearance to what the Bahamas region is widely known for. Soft white sand beaches, turquoise waters of the Caribbean Sea, and swaying palm trees line the beach and island as a whole. 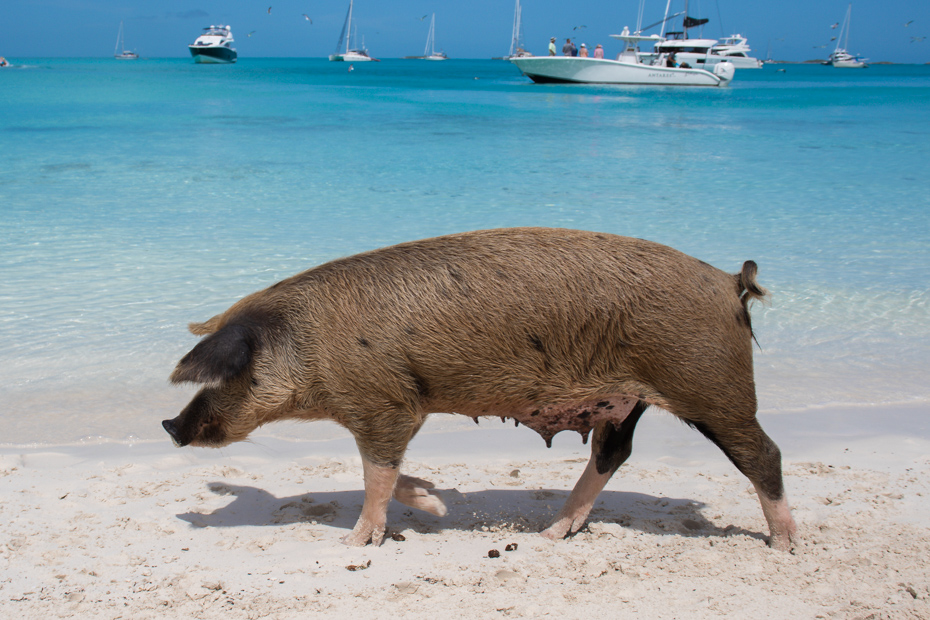 Pig Beach has a beautiful backdrop of Bahamas turquoise waters

Although they may seem lovable and friendly, Bahamas swimming pigs can become rather aggressive on Pig Beach when it comes to getting their food. Be aware and make sure you learn proper etiquette like showing your empty hands when you have no food. 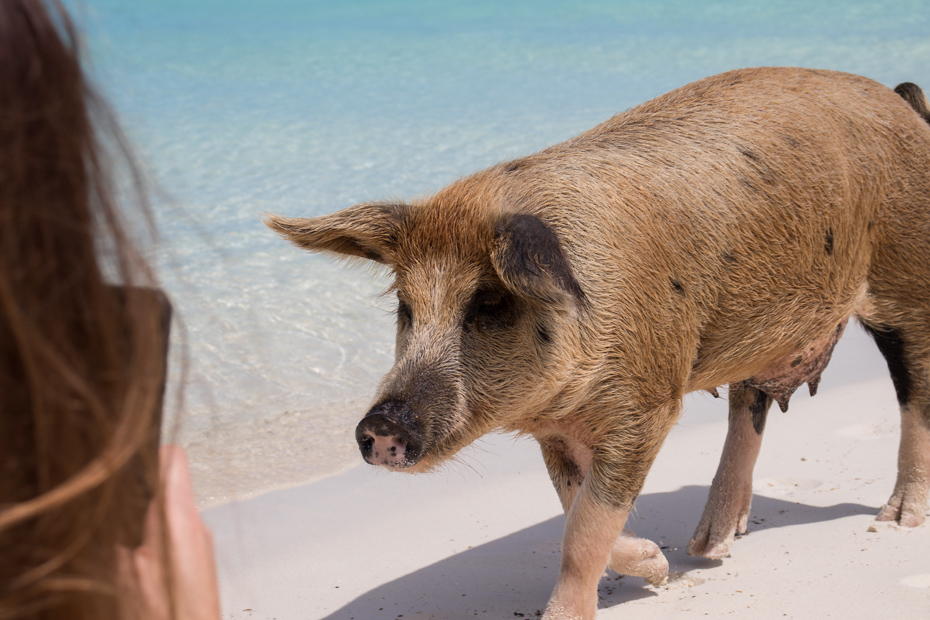 Visit the Swimming Pigs Island on a Bahamas Day Trip

Other than the swimming Exuma pigs, look closely in the water and you may be treated to several exotic species like sea turtles, puffer fish, rays, and even reef sharks.

Other Attractions close to the Swimming Pigs

While you are around Staniel Cay and Pig Beach, there are more attractions in the area to maximize on your visit. 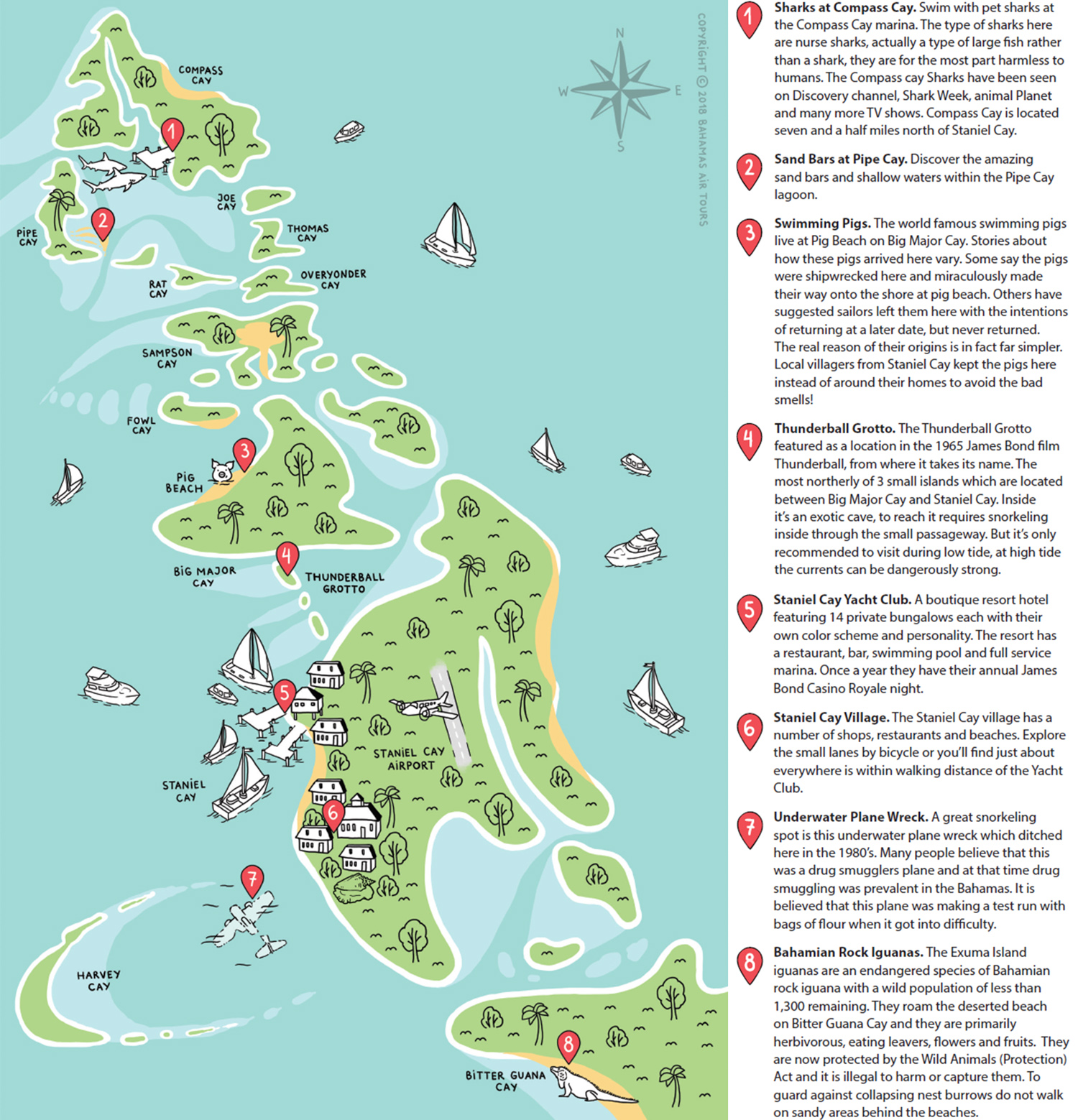