The intriguing underwater plane wreck at Staniel Cay is a fascinating tour highlight in the turquoise waters not far from Staniel Cay airport. It’s a wreck of a drug smuggler’s plane that ditched here during the Pablo Escobar drug running empire in the 1970’s.

The famous Staniel Cay Plane Wreck is one of the most accessible in the world because of its location in shallow sea water. The wreck happened just a half of a mile away from the busy Staniel Cay Yacht Club making it a heavily toured spot in the Exumas today. 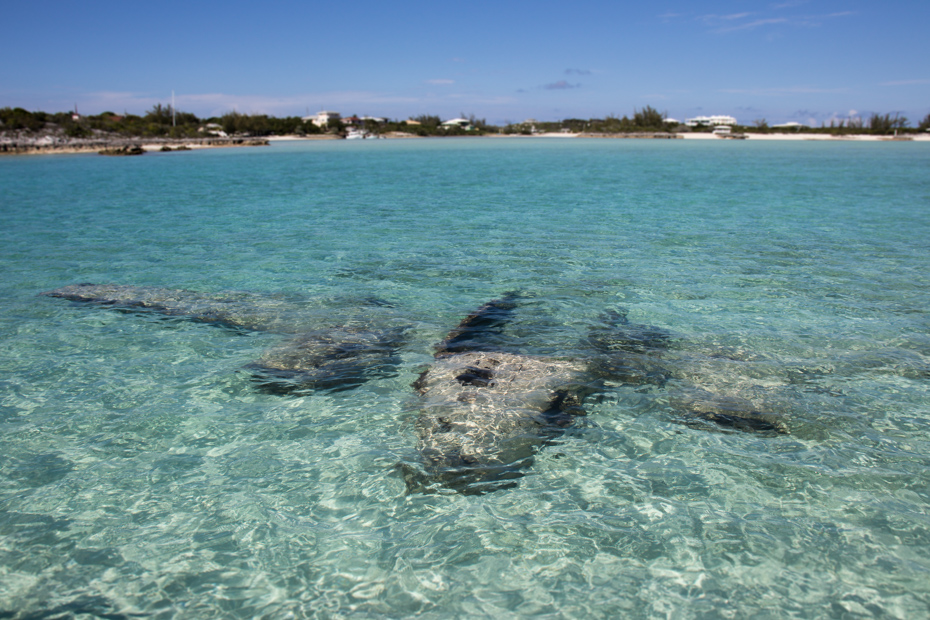 Remnants of the Exuma Plane Wreck at Staniel Cay

Story of Drug Running by Plane at Night

Being such a small place and with only a minor landing strip and infrequent visitors (especially in the 1970s), Staniel Cay airport officials routinely would gather at the nearby bar with their radios on in case of an emergency.

One night, a man called in on the radio line requesting help finding the dimly lit landing strip. As the minutes passed, his voice got more urgent and he began speaking more in Spanish and less in English, saying he was running low on fuel.

As soon as officials got the landing strip lit with car vehicles (as they usually did for nighttime landings), the radio on the other end went silent. Officials feared he had run out of fuel before he could safely land.

In the morning, a search party finally found the plane about ten miles off of Norman’s Cay, sunken with the two passengers still on board. 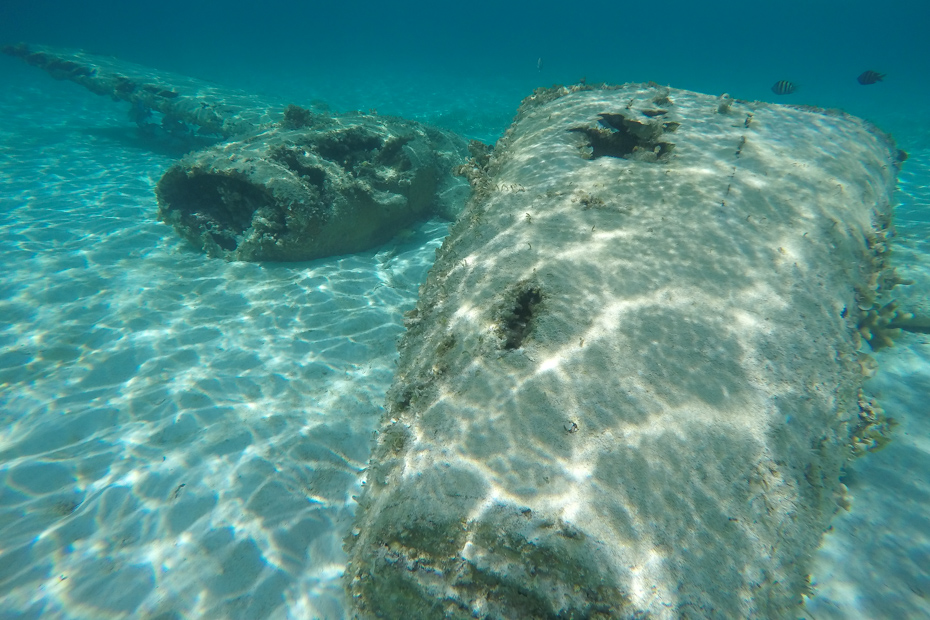 A great way to see the plane wreck is snorkeling underwater.

It turns out, it would have been impossible for them to escape the plane due to the space being packed to the brim with bales of marijuana. They are believed to have been drug runners from Colombia who made frequent stops on their routes from South America to Miami with illegal drugs.

This is not the only story of drug-related accidents in this region of the Bahamas. Being a relatively unpatrolled air space in the 1970s and 80s allowed for it to be involved in many illegal shipments. Though there are other wrecks, this is by far the most accessible for regular tourism. 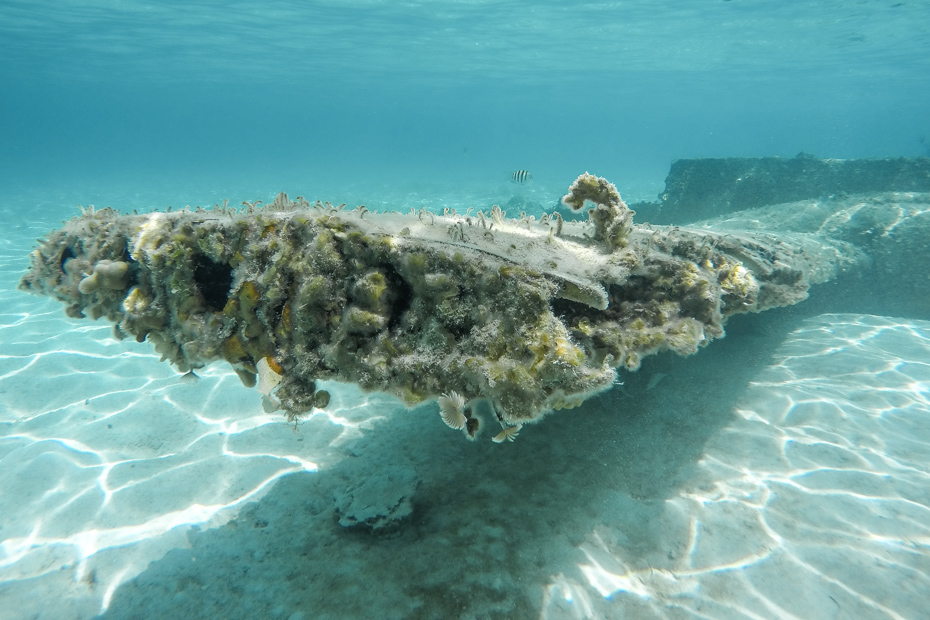 Marinelife is now growing on the Bahamas Plane Wreck

What to do at the Bahamas Plane Wreck

To add to the appeal of the crash site, many species of coral and fish have built habitats around the Staniel Cay plane wreck as is what often happens on and around sites of wrecks under the sea. 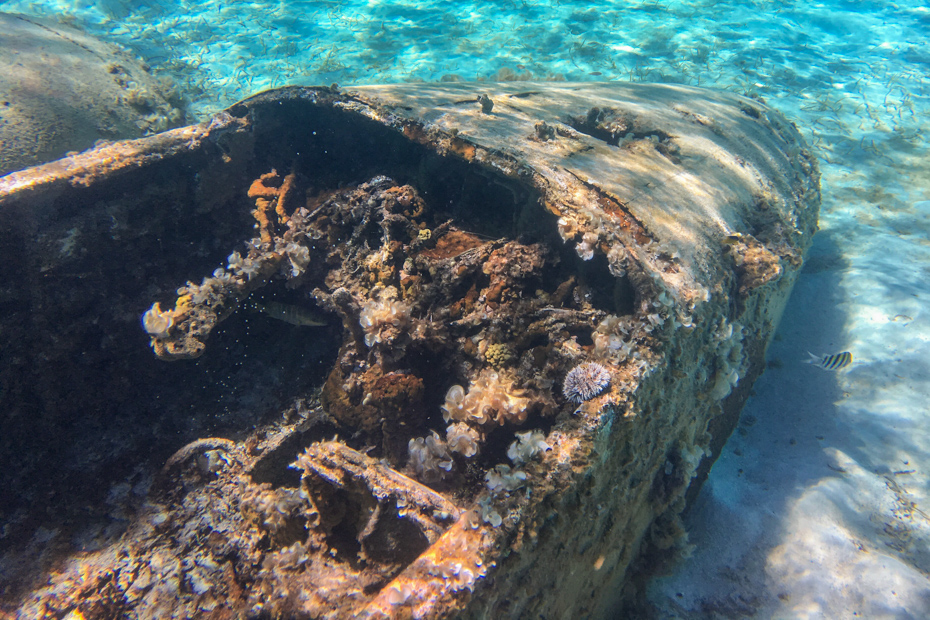 Underwater photo of a sunken drug plane at Exuma, Bahamas

This, coupled with the plane itself and the story behind it, makes for an excellent snorkeling or diving spot in shallow, warm waters no deeper than ten feet from the surface. 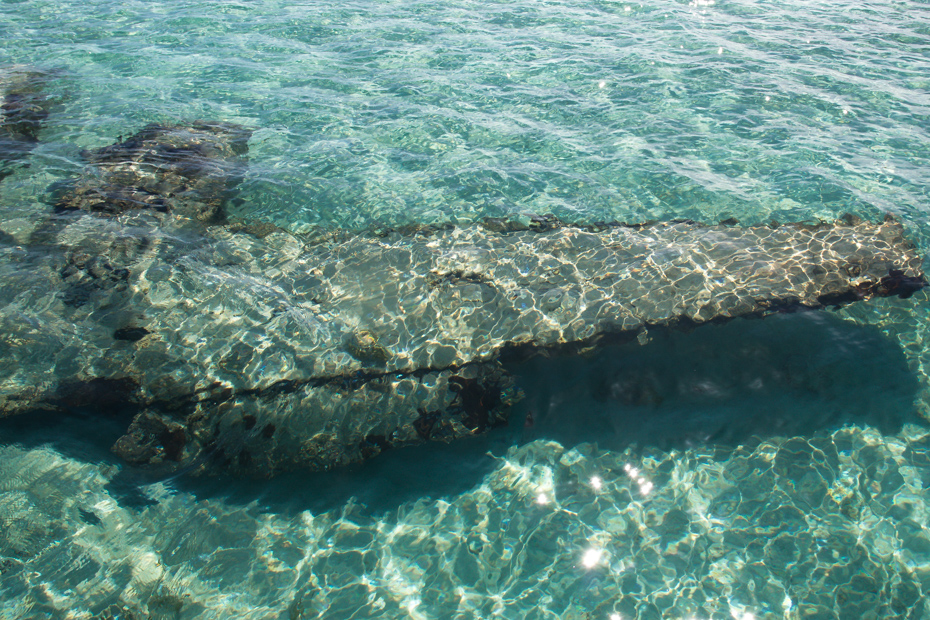 The Bahamas Underwater Plane wreck is located at Staniel Cay

Though it is often referred to as the “Staniel Cay plane wreck”, the infamous Staniel Cay Plane Wreck, which was discovered a day after its crash with illegal drugs packed inside, sits in a shallow part of the sea about ten miles off the coast of Norman’s Cay.

Norman’s Cay was infamous for having been the headquarters of Carlos Lehder’s drug smuggling ring and an important hub for Pablo Escobar’s operation in the Eighties because of the cay’s excellent location between the lower Americas and Miami; the capital of the drug business in the United States of the Seventies and Eighty’s. 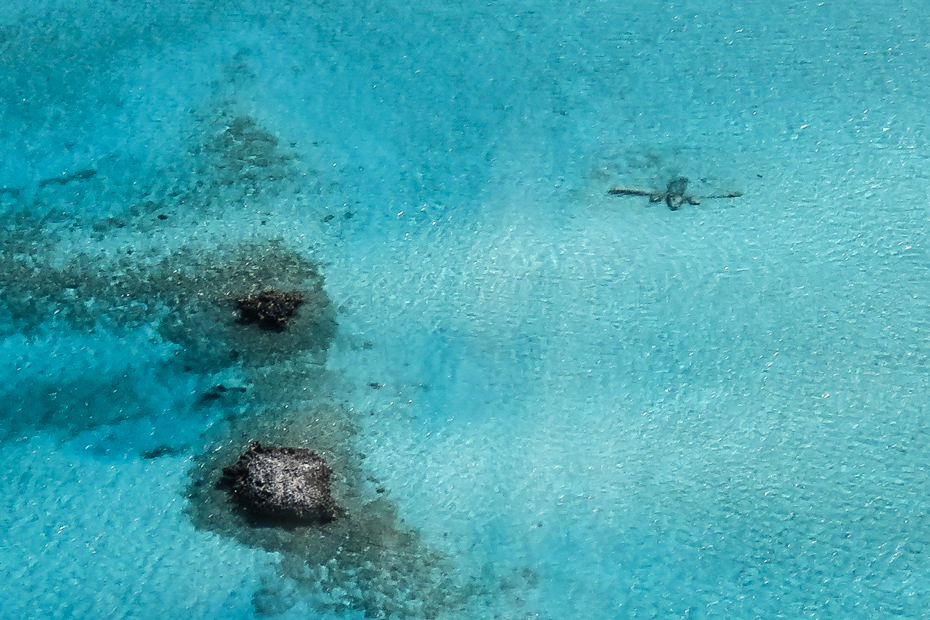 The Exuma Plane Wreck at Staniel Cay can be seen from the Air.

Located just over 80 miles south of the capital city (where a majority of the Bahamas tourism industry exists), it is now very accessible to visit via a day trip from Nassau.

From Nassau, most people travel to Staniel Cay where they can hire a boat to take them out to the wreckage. Staniel Cay is the closest and most accessible cay to see the Staniel Cay plane wreck which actually sits across from Norman’s Cay. 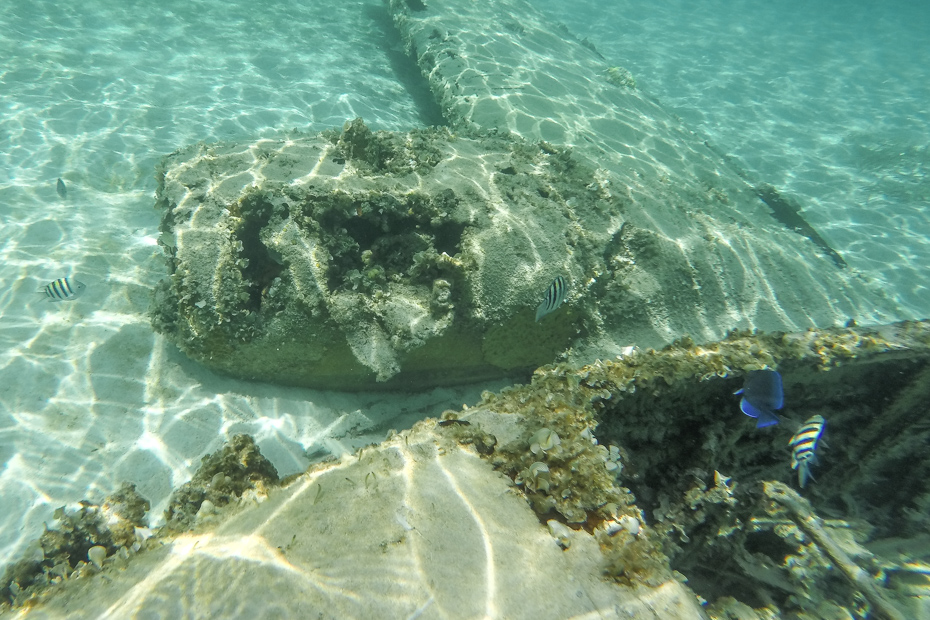 Features of the Staniel Cay Plane Wreck are still very distinguishable including the engine.

Shortly after the plane wreck, Norman’s Cay and all of the illegal business was stopped after a United States-backed crackdown on drugs by the Bahamian government in 1982.

Carlos Ledher was arrested in Colombia in 1987 at which point Norman’s Cay was taken from the hands of the leader and returned to the government of the Bahamas. Now, Norman’s Cay remains the sleepy cay it once was before the Colombian drug trade grew its roots there.

There are many other versions of how the plane ended up submerged under the water including the pilot being intoxicated while flying. Whatever the story is, the plane has become an iconic image of the Exumas over the years for better or for worse. 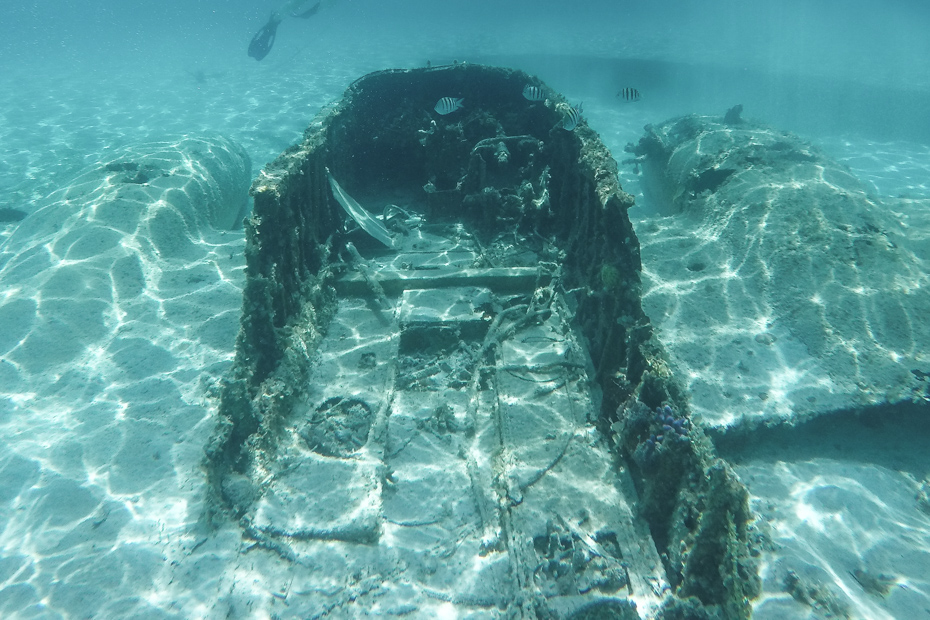 Nearby the Bahamas Plane Crash 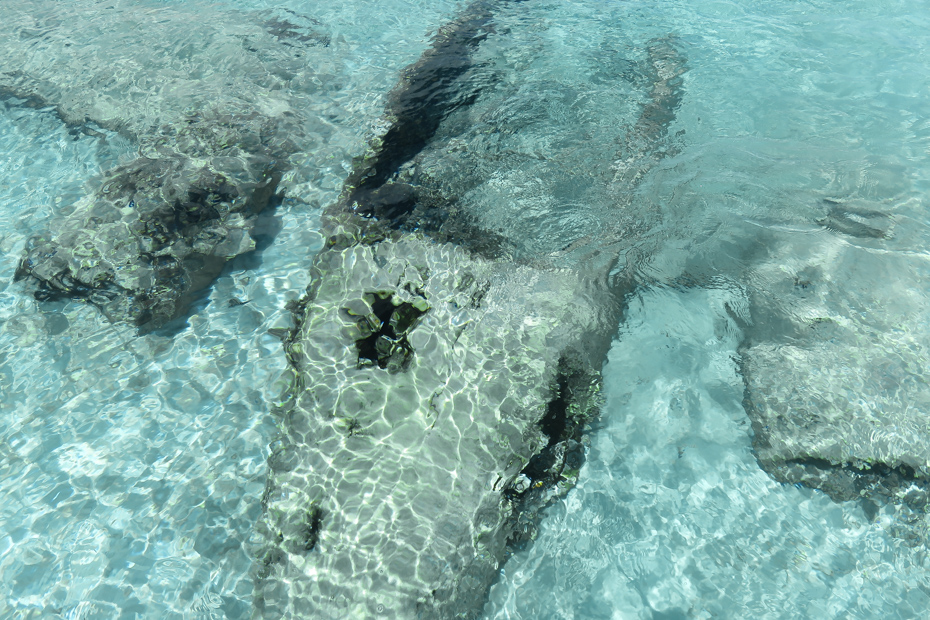 Sightseeing the Bahamas Plane Wreck from the tour boat

How to get to the Staniel Cay Plane Wreck

You can visit the Staniel Cay plane wreck via Bahamas Air Tours from Miami, Fort Lauderdale, or on a day trip from Nassau. Witness some of the most spectacular views of the beautiful Exumas only seen from the sky.

With Bahamas Air Tours, you will be treated in luxury and your schedule is entirely up to you as you are flown around some of the country’s best sights and attractions. Enjoy the intimacy of a plane full of family and your closest friends and bask in the view from your private large viewing window.