Places to go in Nassau: The Top Activities in Nassau 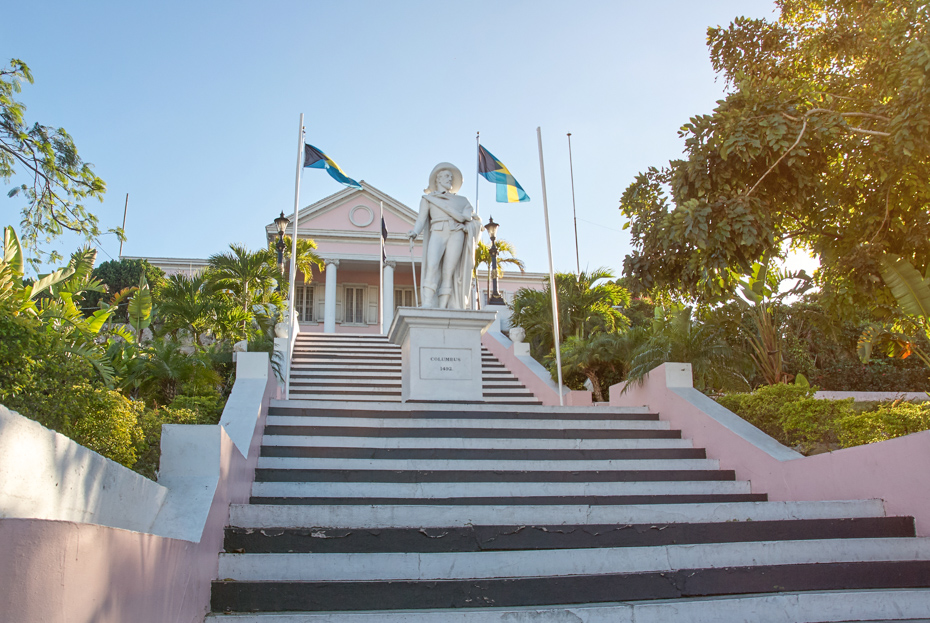 Bordered by Junkanoo Beach and the Nassau Harbor, Historical Old Town Nassau extends between Nassau Street and Elizabeth Avenue, running up to Meeting Street. This district of history contains many free things: museums, forts, a church, and other significant sights that embody Nassau’s Extensive heritage.

Once you’ve toured Nassau’s fascinating history, taking a short plane ride to swim with the pigs in the crystal-clear water of Big Major Cay—or Pig Island—is a new tradition of the Bahamas and a must to experience. Closer to Nassau, Rose Island offers some tranquil and secluded white-sand beaches away from the hustle and bustle of Nassau Old Town.

The Governor’s House and Parliament Square are notable places to go in Nassau’s historic district. A walking self-tour of the downtown area is simple—most all attractions are within proximity of one another. It is one of the easy sets of activities in Nassau to experience.

The Governor’s House – This unique Bahamian pink and white building was designed to match Parliament Square. The impressive statue of Christopher Columbus, sculpted and gifted to the House from London in 1830, commemorates Columbus’ landing in the Bahamas in 1492. It majestically welcomes visitors ascending the stairs that lead up to the house. 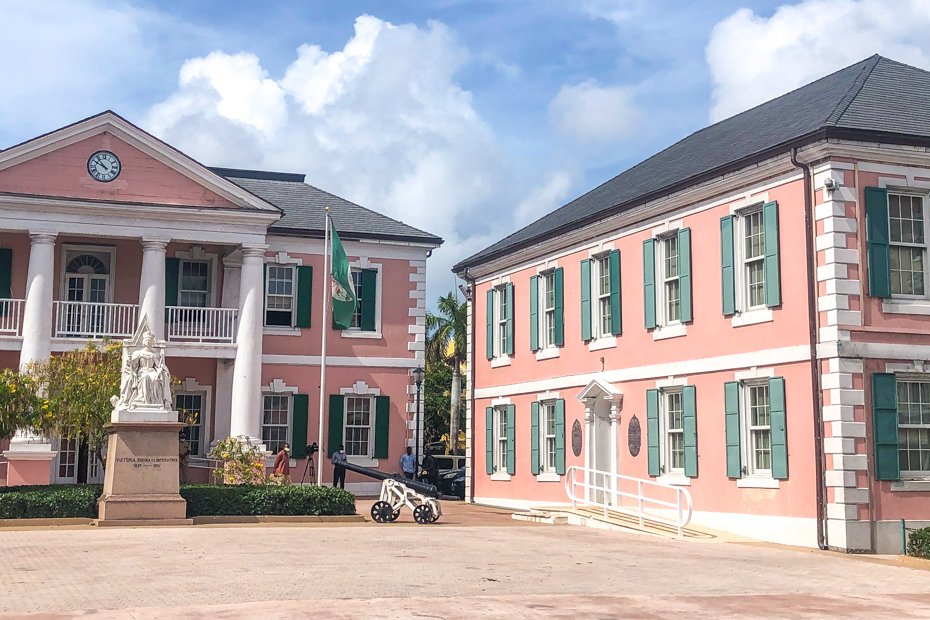 Parliament Square – Nassau is the seat of the national government. Parliament Square’s colonnaded buildings—they are also pink, matching the Governor’s House—were constructed in the late 1700s. The square is filled by the considerable presence of the statue of a seated Queen Victoria, erected in 1905.

Nassau’s extensive history is on display in the numerous museums located throughout its historic downtown. From pirates to paintings, the essence of the city’s cultural legacy is fully presented, conveying the broad array of the Islands heritage.

Pirates of Nassau – The notorious Blackbeard the Pirate made Nassau a part of his pilfering routine—the history of the time of pirates is uniquely captured here. The museum is complete with sound effects—it has interactive displays that will make learning about Blackbeard and his Privateers Republic both entertaining and educational.

National Art Gallery of the Bahamas – This is the premier arts institution in The Bahamas and is committed to wholly exhibiting the history of Bahamian art. Housed in an Italianate-colonial mansion that was built in 1860, the gallery displays the esteemed works of Bahamian artists such as Max Taylor, Amos Ferguson, Brent Malone, John Cox, and Antonious Roberts.

Pompey Museum – Home to several Bahamas artifacts, this building was used for slave auctions in the 18th century. Now a historical landmark, the Pompey Museum of Slavery and Emancipation sits just off Pompey Square (between the downtown waterfront and bay street, adjacent to the Nassau Straw Market).

Bahamas Historical Society – Built in the 1850’s, this building hosts several relics that tell the story of the Bahamas of the past.

Heritage Museum of the Bahamas – The exhibitions and collections in this museum are owned by Hamilton White, a well-known British antique collector. Take a guided tour or opt for your own self-guided audio visit. From the days of Pirates, through the darkness of slavery and then the present, this museum covers the full gambit of the Bahamas history.

Junkanoo Beach: immerse yourself in the local culture 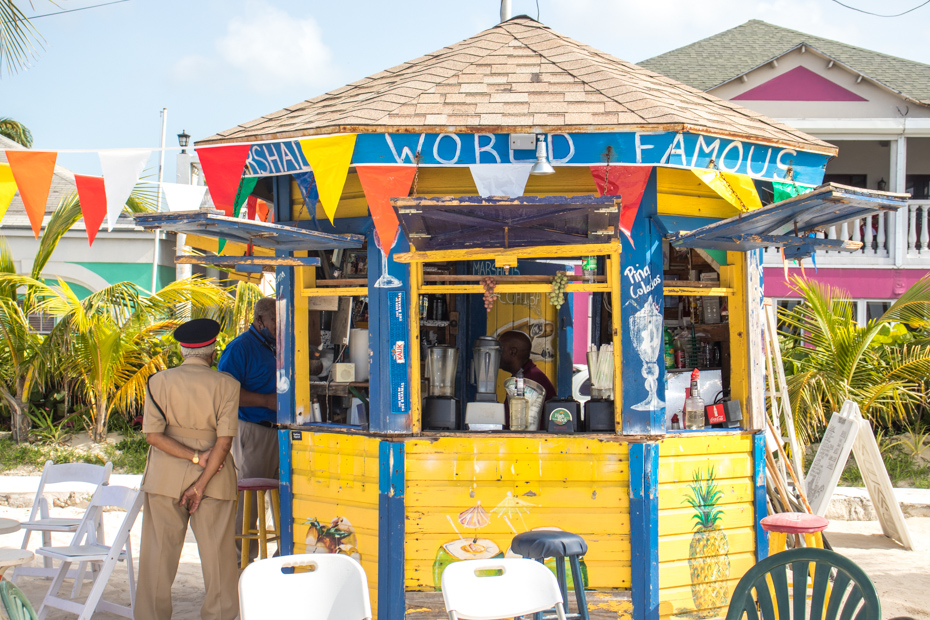 Junkanoo Beach is one of the best beaches in downtown Nassau

Educulture Junkanoo Museum – Originally a temporary celebration of freedom for slaves who were given three days off for Christmas, Junkanoo blossomed into a permanent, exuberant parade. The museum’s exhibits show the informative and interesting history of Junkanoo and The Bahamas.

Substantial pieces of Nassau history sit within the walls of the city’s forts. Placed strategically along Nassau harbor, the forts offer fantastic views of the ocean and accompanying landscapes. At a time when the city was always in perceived peril, the forts added much security to thwart unwanted invasions. As you put together a list of places to go in Nassau, keep the forts near the top.

Fort Fincastle – Positioned at the top of Bennet’s Hill as a lookout post, this fort was built with cut limestone and completed in 1793. When it was no longer needed as a lookout station, it was repurposed into a lighthouse for the northern shoreline of the Island. 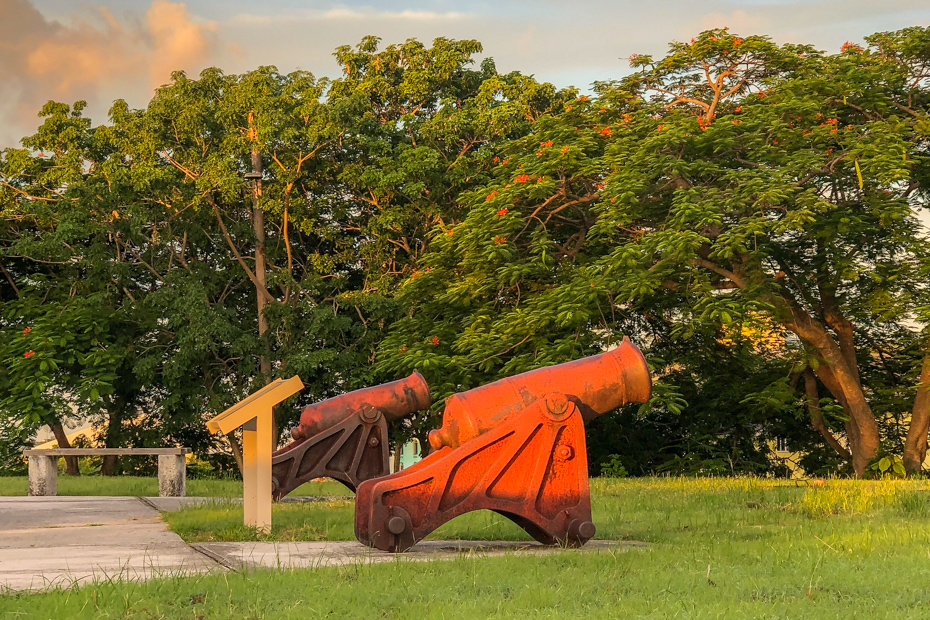 Fort Montagu – The oldest of the island’s forts, Montagu was built on the eastern shore of New Providence Island to repel Spanish invaders. Peter Henry Bruce oversaw the construction of the fort that began in 1741. The only action it saw was when it was held by American troops, John Paul Jones among them.

Fort Charlotte – This 1789 fort features a waterless moat and dungeon, and has a great view of the ocean. It is the largest of the three forts in Nassau, was named in honor of the wife of King George III. A historic parade and canon firing take place daily at noon.

Queen’s Staircase – Commonly referred to as the 66 steps, the staircase is a major Nassau attraction and landmark located in the Fort Fincastle Historic Complex. It was hewn out of solid limestone rock by slaves between 1793 and 1794, and it is said that it provided a direct route from Fort Fincastle to Nassau City. 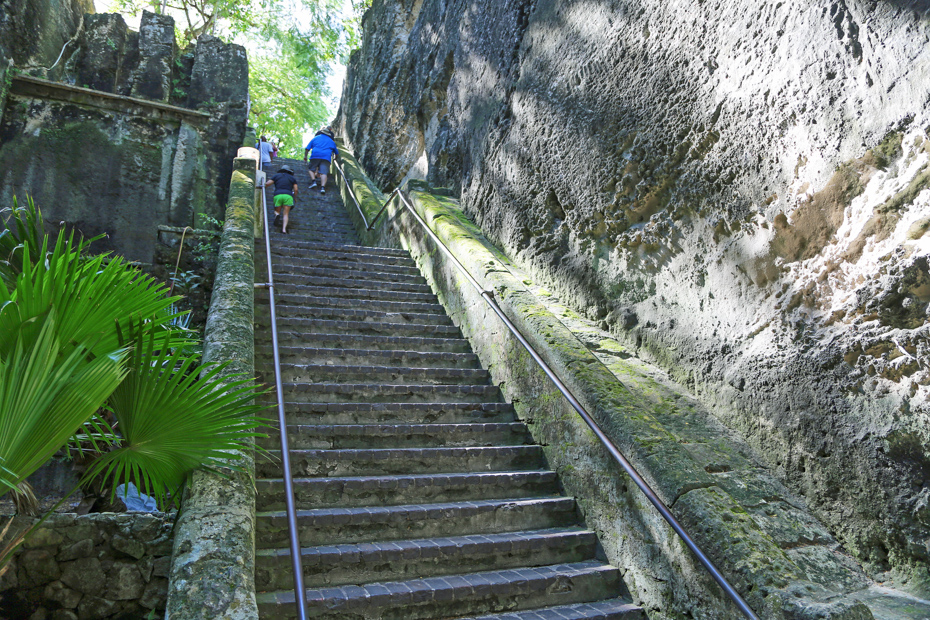 Queen’s Staircase, Nassau is one of the most historical places to go in Nassau

Christ Church Cathedral – Built in 1837 when Nassau officially became a city, the stain-glassed windows and beautiful flower garden at the cathedral are radiant to see and experience. Sunday mass is held at 7:30 am, 9 am, 11:15 am, and 6 pm.

Gregory’s Arch – Cut through a thick limestone hill along Market Street, Gregory’s Arch connects downtown Nassau with the Over-the-Hill district. The latter was the neighborhood for emancipated slaves during the 19th century. The 20-foot tall archway and bridge was constructed in 1852 in the middle of the term of Governor John Gregory and bears his name. 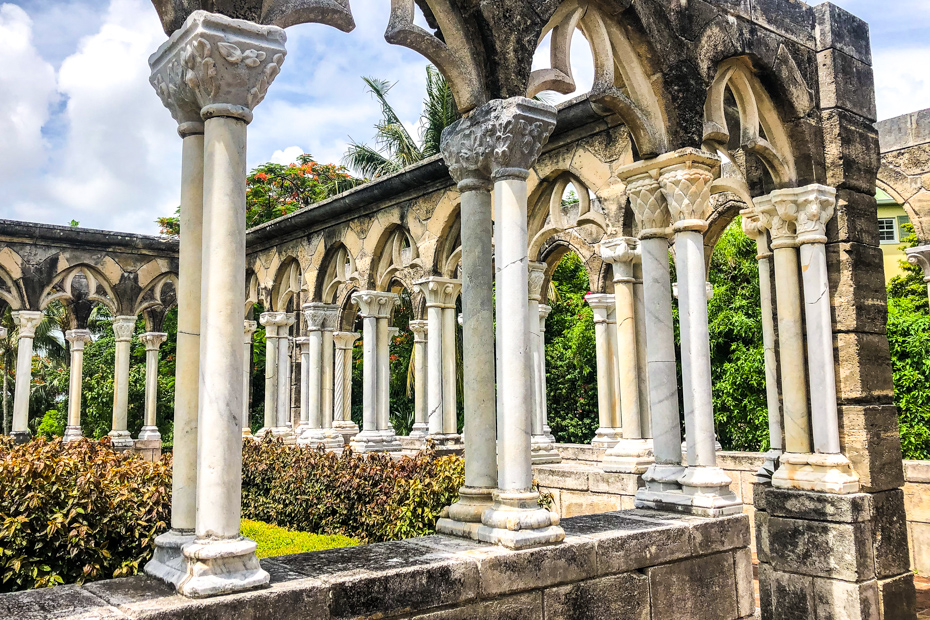 Rawson Square – The gateway to the city for cruise ship passengers, the square was named for Sir Rawson W. Rawson, the Governor of The Bahamas during the late 1860s. In the middle of the square is a bronze bust of Sir Milo Butler, the first Bahamian Governor General in an independent Bahamas.

Nassau to Exuma Day Trips: Swimming with the Pigs

With a good sense of Nassau’s history in your grasp—you’ve visited the museums, seen the stairs, checked out the arch, and imagined yourself a Nassau Pirate, you’re ready for one of the many possible day trips from the city – Pig Island is a great place to start. 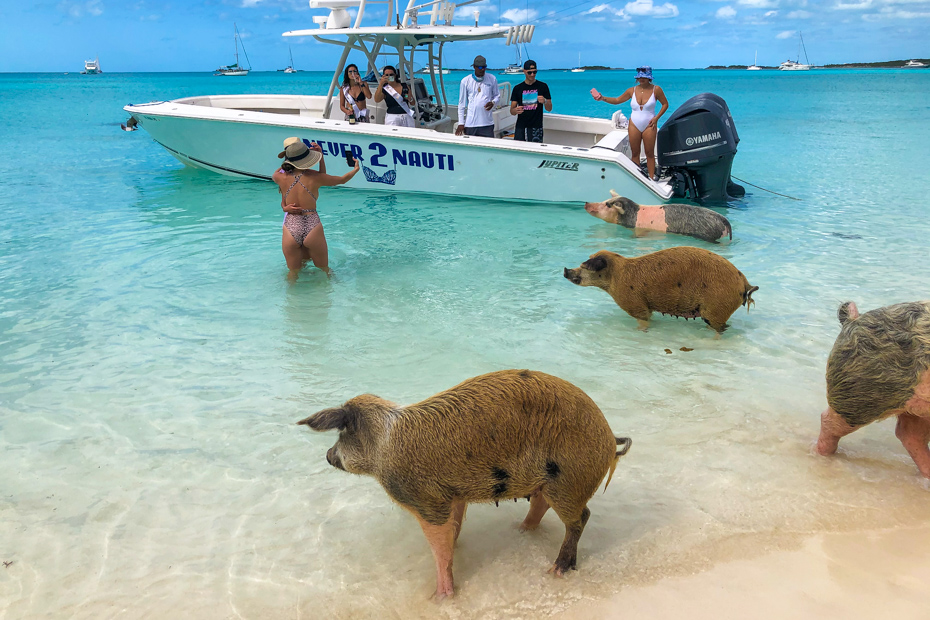 Why Swimming Pigs – In the early 1990s, the farming community in Staniel Cay village began to complain about the stench coming from the pigpen in town. The owners of the farms developed a solution—moving them to the uninhabited neighboring island, Big Major Cay. There, the pigs wouldn’t have any predators, could roam the entire island freely and the farmers could easily motor to them with their daily feed. The pigs quickly trained themselves how to swim out to the farmer’s boats before they hit the shore. Hence, swimming pigs.

Bahamas Air Tours has flights to Bahamas’ Exuma islands whenever you’d like. Book today on their Nassau to Exuma Day Trip by plane. We will work with your itinerary for the rest of your trip to the Bahamas as you assemble the other places to go in Nassau. We let you build your own itinerary in the Exumas. Just tell us where you want to go and we’ll take you there! 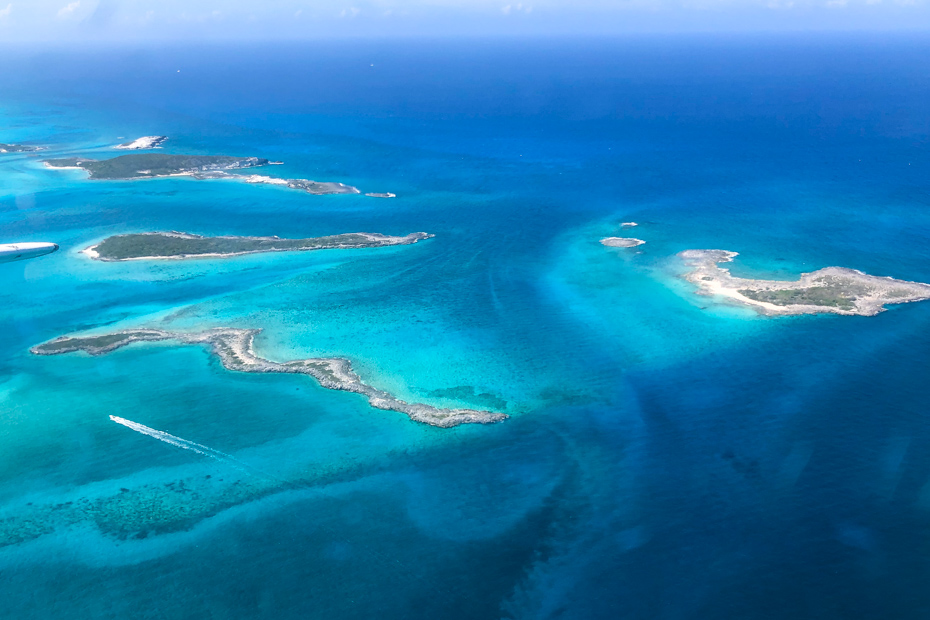 Fly to the Exuma Cays with Bahamas Air Tours 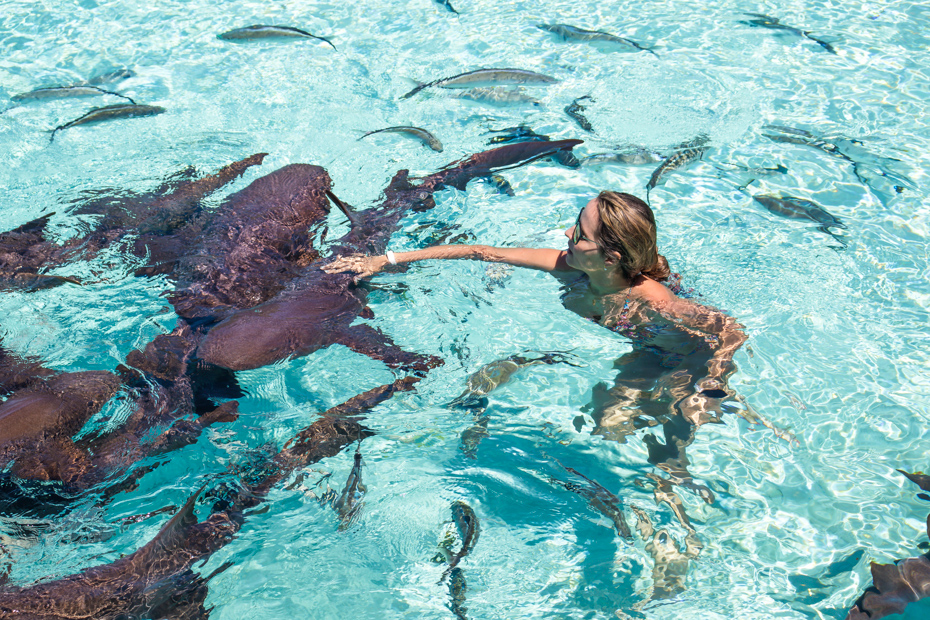 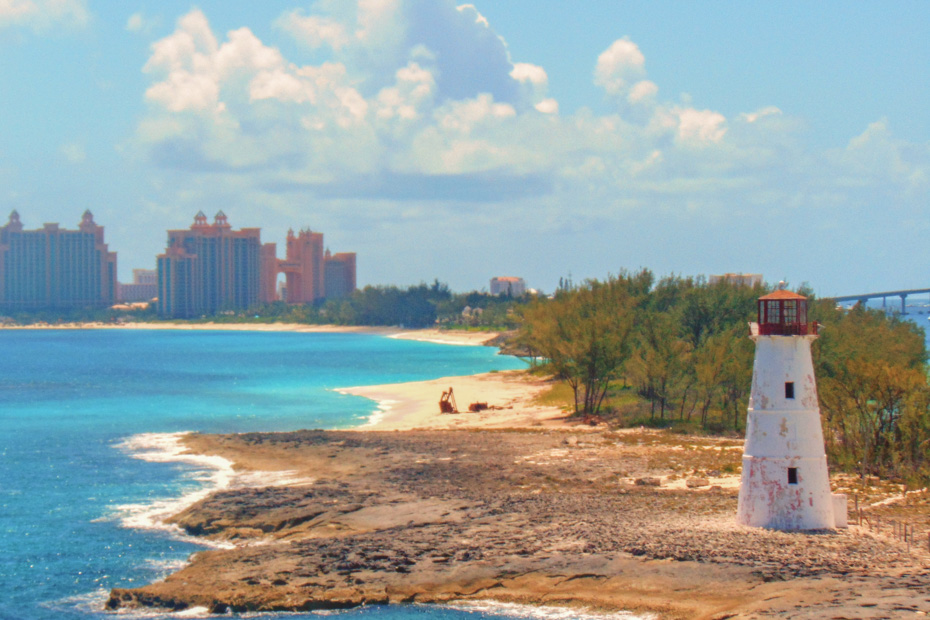 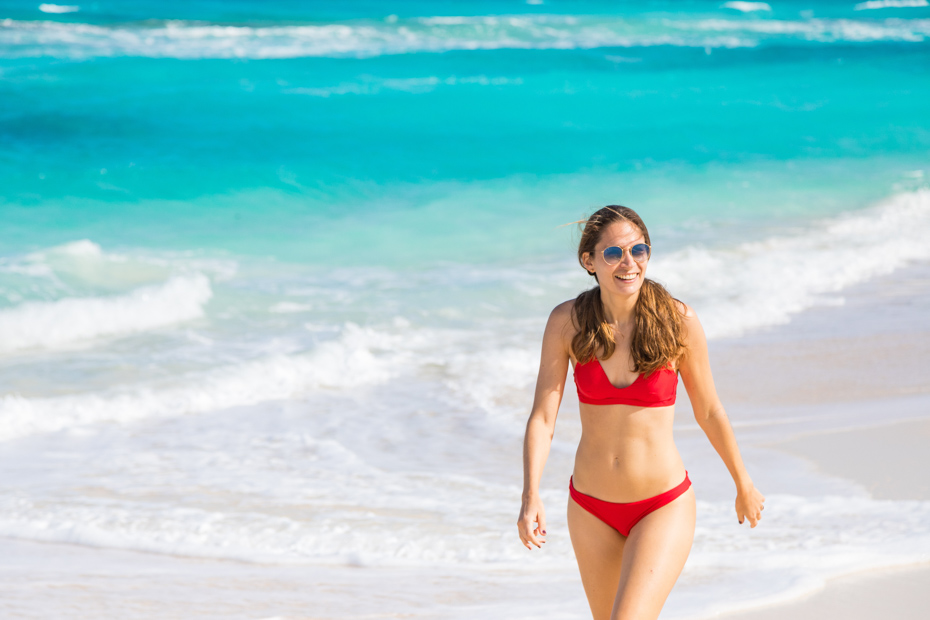 5 of the Best Places to Visit in Bahamas

Places to go in Nassau: The Top Activities in Nassau