Where is Pig Island Bahamas and How to Get There 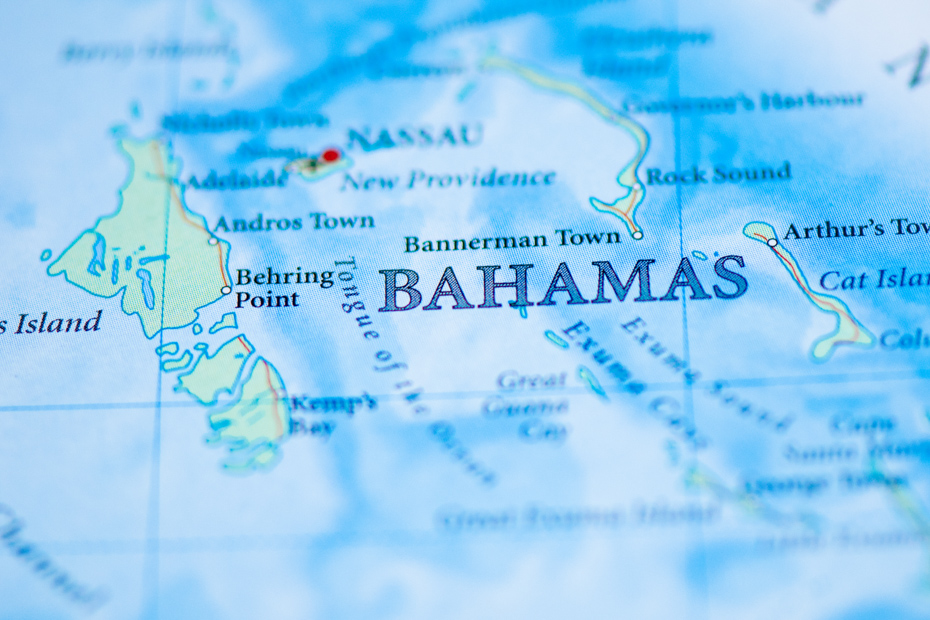 “Where is Pig Island in relation to Nassau?” We get this question all the time from people vacationing in the Bahamas’ capital. In this article, we will answer it plus tell you how to get from Nassau to Exuma so you can spend less time worrying about details and more time dreaming about the best Bahamas vacation you can think of.

This archipelago country holds a special place in our hearts. With over 700 islands waiting to be explored, its white-sand beaches and luxurious resorts await your wild adventure. In this article, we will focus on one of the more well-known islands of the bunch — Big Major Cay — otherwise known as Pig Island. Its beaches see a majority of the 6 million visitors that visit the Bahamas annually and are an experience you don’t want to miss. Even simply flying over the turquoise blues and vibrant greens of the wild set of 360 islands, islets, and cays known as the Out Islands will have you eager to spend a day under the sun.

Once you are on one of our Pig Island tours from Nassau, you won’t be able to imagine yourself anywhere else but in the water with the Bahamas swimming pigs. With a Bahamas air charter, we can take you on excursions of our Exuma day trips that other companies won’t. Whether that’s floating to shore with Exuma pigs or wading with reef sharks; observing endangered iguanas on Bitter Guana Cay or finding hidden sand bars at Pipe Creek. We will show you the best that the exotic Exumas has to offer on an exclusive Nassau to Exuma Day trip with Bahamas Air Tours. 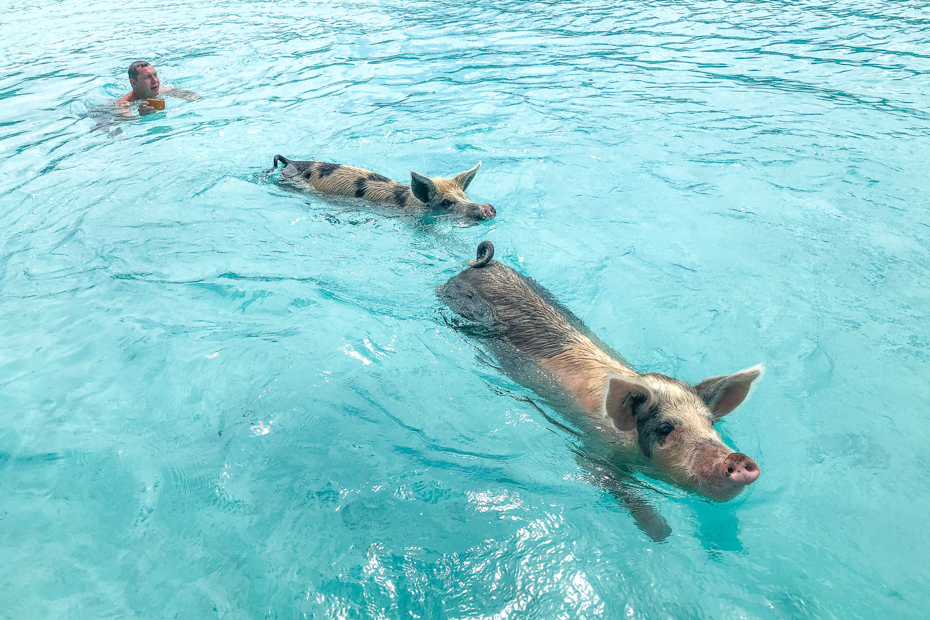 Where is Pig Island? That’s a question we get all the time. Read on to find out!

Where is Pig Island?

So, it’s about time we answer the question; where is Pig Island? The original Pig Island is Big Major Cay which sits in the heart of the Exuma Cays. That’s about 80 miles southeast of the capital, Nassau — which is where you might be while reading this.

Although there are plenty of copycat swimming pigs tours that claim to be the real deal, the best and only original experience is found at Pig Beach. It’s a ten-minute boat ride from Staniel Cay which is known as being the gateway to the Out Islands.

On any swimming pigs Exuma tours, you will most likely be taken to Staniel Cay where you will not be far from the real Pig Island. Make sure you ask your tour operator “Where is Pig Island?” before booking your tour. That way, you know whether or not you will be taken to the real deal.

For ethical reasons, we wouldn’t want you swimming with the pigs that were brought there specifically for tourism. The original pigs have been on Big Major Cay for 25 years or more and were originally put on the island by farmers from Staniel Cay. At that time, tourism was not even thought about. We’ll get more into their origin story a little later. . . 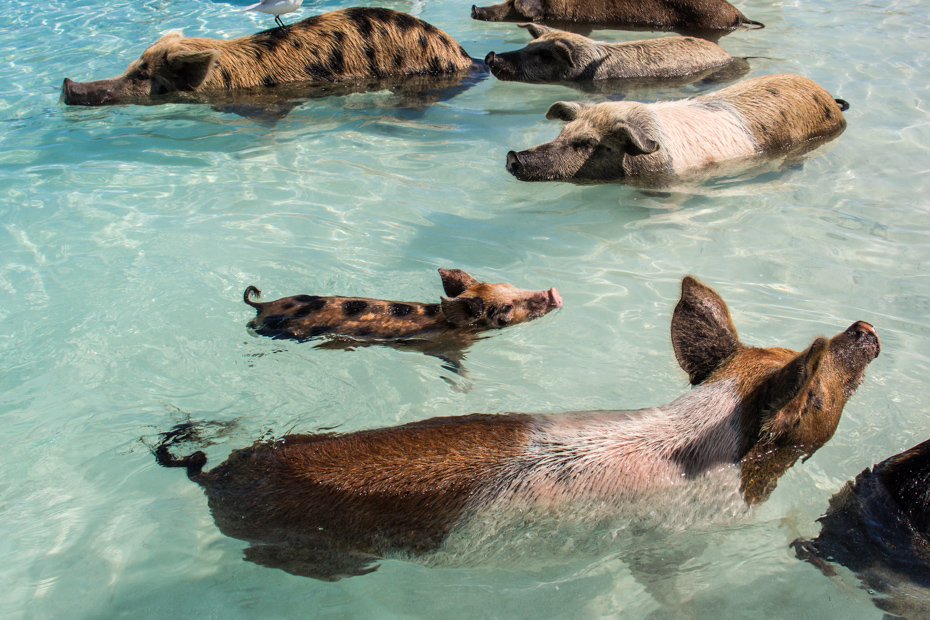 Take our Pig Island tours from Nassau to be with the Exuma pigs!

How to Get to Pig Island Bahamas

Now that you know where is Pig Island, we are going to look at how to get from Nassau to Exuma so you can check out the pigs in the Bahamas.

Let me start off by saying; most tours to Pig Beach will take you directly to the pigs so you need not worry about how to get there. If you are lucky, your tour provider will provide door-to-door service from your hotel like Bahamas Air Tours.

A day trip to Bahamas on your own is tricky, especially if you want the same swimming pigs Nassau tour experience we offer. It’ll just take a little more foresight on your end. However, if you plan on getting back to Nassau the same night, good luck! We highly recommend taking one of our swimming pigs Exuma trips if you want to stay in Nassau. Otherwise, you might as well move to a hotel in Staniel Cay or somewhere else nearby in the Exumas.

That’s because a day trip on your own would require several boats and even a potential taxi ride. That’s a three-hour trip, at least, and that’s if you don’t face any delays.

First, you should set your target on getting to Staniel Cay. There are a few ferries that will bring you to Staniel Cay, but it requires research to match schedules and accommodation options, especially in the busy summer travel season. From Staniel Cay Yacht Club, you can typically negotiate with a local fisherman to take you out to Pig Beach. But you should expect an ultra-inflated price. Sounds like a lot of struggle, right?

Whereas, on a tour, we will pick you up from your hotel and take you right to where you want to go and you don’t even have to lift a finger. 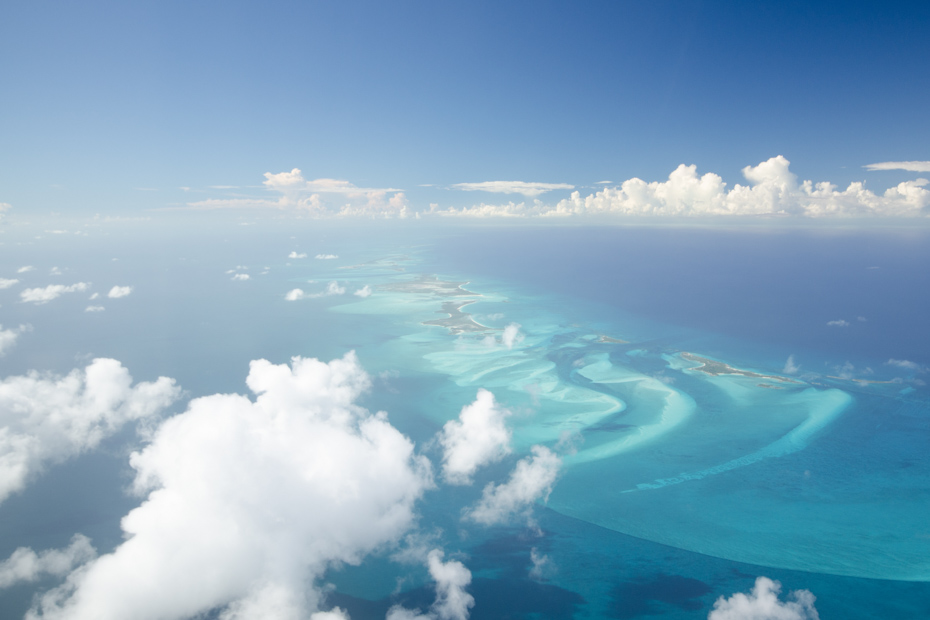 Take a flight to Pig Island Bahamas in the exotic Exuma Cays.

As we suggested, knowing where is Pig Island is only half of it. You must also make sure your Staniel Cay day trips’ operator is taking you to the original beach. Nowadays, it has become such a popular attraction that there have been many imposter beaches with a few pigs. These savvy scammers will claim to be the original Pig Beach.

Indeed, you might be able to go swimming with the pigs at one of these imposter sites, but it will be nothing compared to the experience you will have at the original where the Exuma pigs have grown up in the environment and have learned to swim on their own.

Usually, these fakes will have only a few pigs and often, the pigs will be treated very poorly. We suggest making an effort to not feed into this problem! 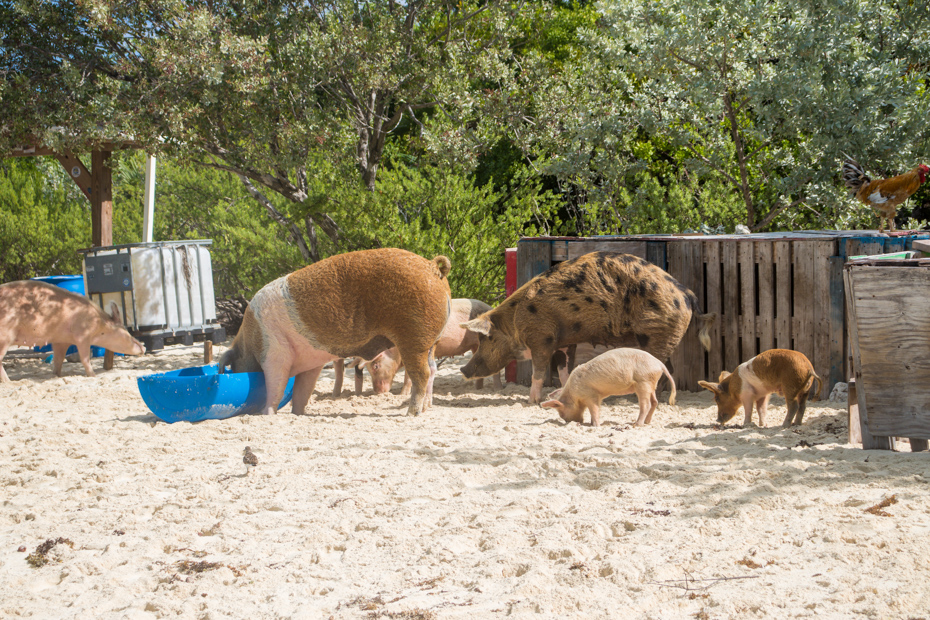 The Origins of Pig Beach: Where is Pig Island?

The story of Pig Island doesn’t date back too long ago. Although there are alternating stories depending on who you ask in the Bahamas (some including stories of piracy), the most widely accepted explanation of how they got to the island is a little less exciting.

It was sometime in the early 1990s when the farming community in Staniel Cay village began to complain about the stench coming from the pigpen in town. The owners of the farms had to develop a solution which eventually became moving them to the uninhabited neighboring island, Big Major Cay.

There, they wouldn’t have any predators and could roam the entire island freely. Eventually, after learning which beach the farmers would motor into with their daily feed, the pigs ended up settling in one area of the island.

The pigs quickly trained themselves how to swim out to the farmer’s boats before they hit the shore. Those pigs to reach the boat would be the first ones fed in the water. Thus, that’s how we ended up finding where is Pig Island.

Hopefully, by now you have a good idea of where is Pig Island. Perhaps, you have decided our Bahamas day trips by plane would be the right Nassau to Staniel Cay day tour for you. Great!

We have flights to Bahamas’ Exuma islands whenever you’d like. We will work with your itinerary for the rest of your trip to Bahamas. In fact, we let you build your own itinerary in the Exumas. Just tell us where you want to go and we’ll take you there! 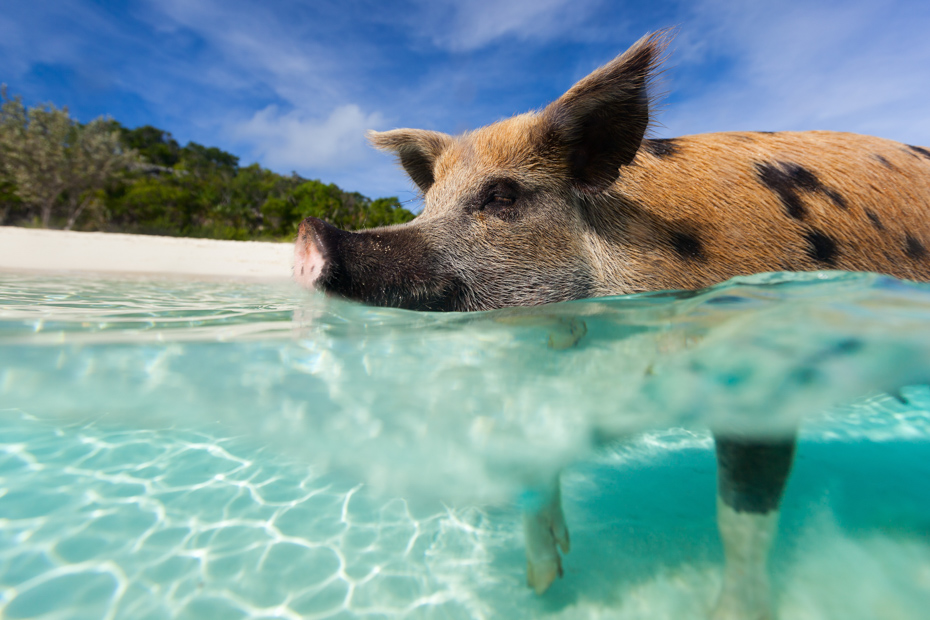 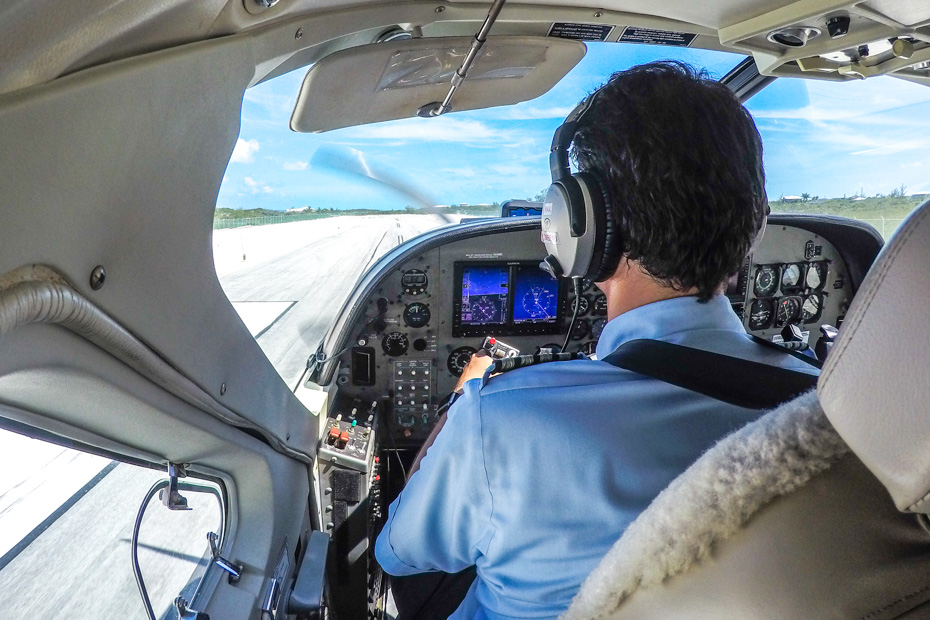 Florida to Bahamas by Plane: How Flying offers a unique Experience 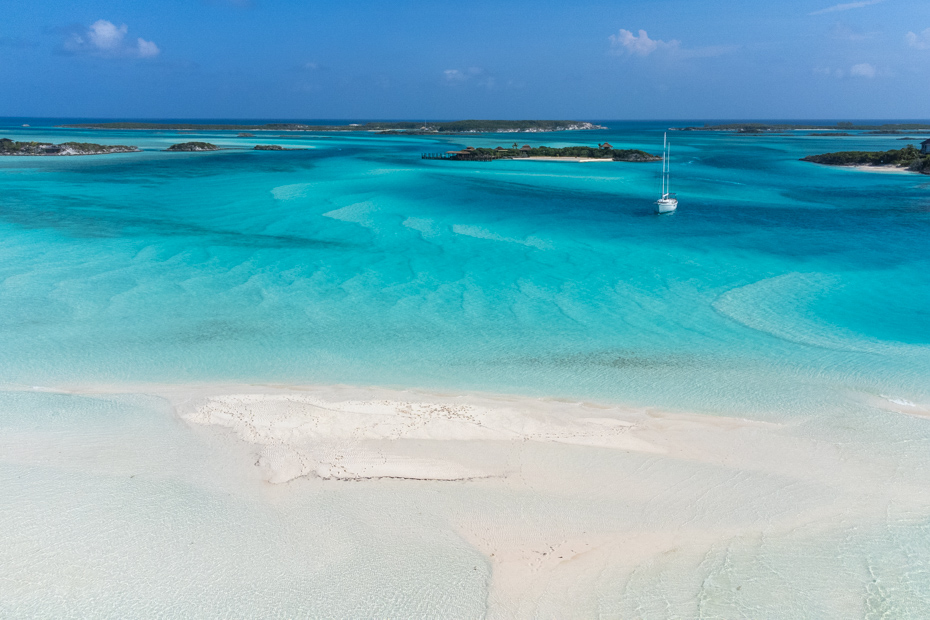 Exuma Cays Adventures: 7 Top Things to do in Exumas

Where is Pig Island Bahamas and How to Get There